A round-up of F1 testing in Barcelona -Day One

Lewis Hamilton topped the timesheets for world champions Mercedes in Barcelona yesterday, day one of Formula One 2017 testing.

Hamilton’s best lap – set on Pirelli’s soft-compound tyre – was a 1m 21.765s, already a second faster than the quickest time seen throughout pre-season testing at the same venue last year.

Ferrari’s Sebastian Vettel was second in the order, his SF70H car just a tenth down on Hamilton, with the German’s best time set on medium rubber.

Both teams had highly productive days. Mercedes, with Valtteri Bottas at the wheel in the morning and Hamilton in the afternoon, recorded 152 laps, while Vettel racked up 128 for the Scuderia.

Williams made it two Mercedes-powered teams in the top three, with Felipe Massa third quickest after a century of laps, while Kevin Magnussen took fourth on his Haas debut, despite a brush with Barcelona’s barriers during the morning.

Sensor and then battery problems hampered Daniel Ricciardo’s first day in Red Bull’s RB13, the Australian ultimately finishing with the fifth-best time ahead of Bottas with a 50-lap tally.

Red Bull’s head of Race Engineering, Guillaume Rocquelin said: “Obviously we lost quite a bit of time today, which was frustrating. That was largely a function of the issues we had – a sensor problem this morning and then a problem with the energy store later on. Both are hard to access, so required some time to sort out. It meant we didn’t get real track time until around 4pm, but after that we ran without issue.”

He added: “The fixes we put in place cured the issues and we should be good to go tomorrow again. Daniel managed 50 laps in the end and what we saw during that period was encouraging. The inevitable question you get asked on day one is: ‘is it quick, is it a front-runner’, and I’m afraid the rather dull answer to that question is ‘we’ll have to wait and see’. It’s a cliché but we won’t know the real answer until Saturday in Melbourne. Until then we just have to keep our heads down, stick to the plan and the performance will come. That process continues tomorrow.”

Day One of testing for Red Bull

McLaren had the dubious honour of completing the fewest laps, as an oil system issue side-lined a frustrated Fernando Alonso for much of the morning. He said: “”The car arrived at 1am on Saturday and on Sunday we were on track doing a filming day, so no one is happy to lose a day and no one is hiding their frustration. There’s an infinite amount of things to test and we couldn’t do it. Without hiding that, we need to stay calm. It’s eight days of testing so let’s draw conclusions after the eighth day and let’s hope they are better than today.”

The Spaniard’s fortunes improved in the afternoon, as he put the Honda-powered MCL32 tenth, ahead of final runner Marcus Ericssson for Sauber. 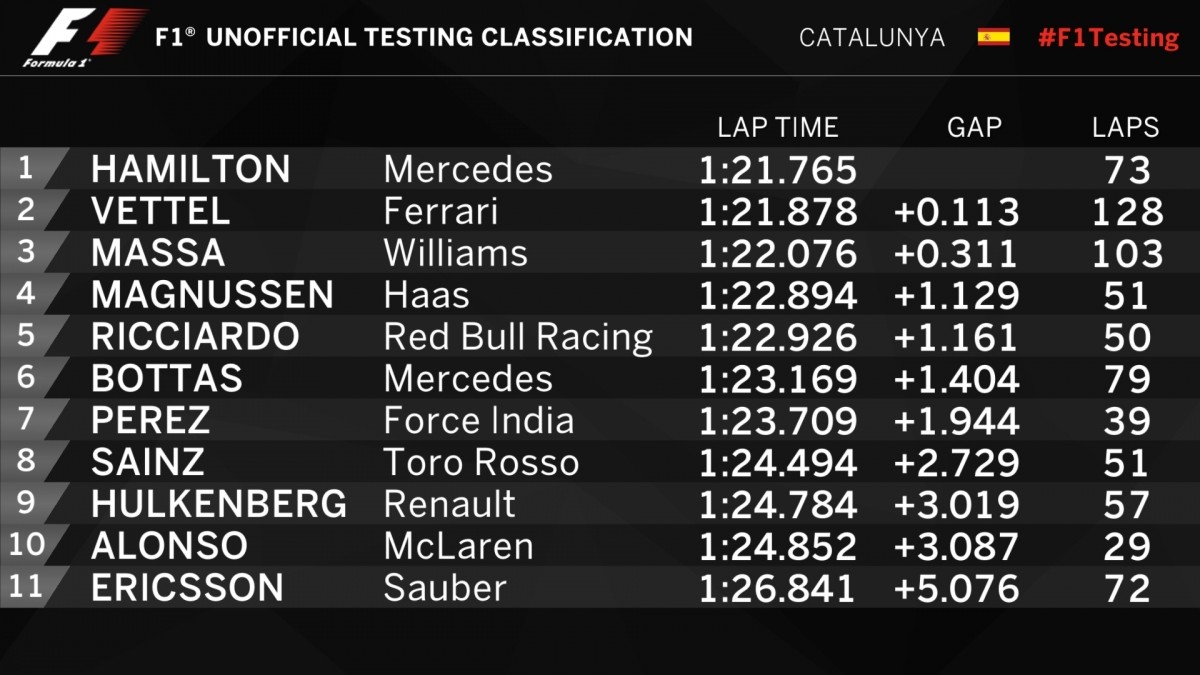