Infiniti and Pirelli have announced they will collaborate on Infiniti’s ‘Project Black S’. The new partnership was announced at the Canadian GP by Tommaso Volpe, director, Infiniti Global Motorsport, and Paul Hembery, Motorsport Director, Pirelli’s. ‘Project Black S’ is a collaborative venture between Infiniti and its Renault-Nissan Alliance partner, Renault Sport Formula One Team, celebrating the relationship between the two. The Italian tyre maker will equip the Black S with P Zero tyres that are also available as part of the Coloured Edition. Just as in Formula One, there are coloured markings on the sidewalls, in line with Pirelli’s perfect fit strategy.

Unveiled in March 2017, ‘Project Black S’ explores the potential of a future performance grade for Infiniti, Pirelli’s contribution will include the design and construction of bespoke tyres developed exclusively for ‘Project Black S’. Suggesting a radical reinterpretation of the Infiniti Q60 coupe, the ‘Project Black S’ features a stand-out, aerodynamically-optimised new design. It also hints at how a performance hybrid powertrain – developed in close collaboration with the Renault Sport Formula One Team – could significantly enhance the performance and dynamics of an Infiniti production car.

Pirelli was attracted to the Project Black S as a true track-to-road technology transfer project. “We were fascinated with ‘Project Black S’ since Infiniti unveiled it at the Geneva motor show earlier this year and we simply had to get involved,” said Hembery. “‘Project Black S’ is the ultimate expression of innovation and cutting-edge technology transfer, which is in our DNA, so we couldn’t let this opportunity go by. We are thrilled to be a part of it and to support Infiniti on this project.” 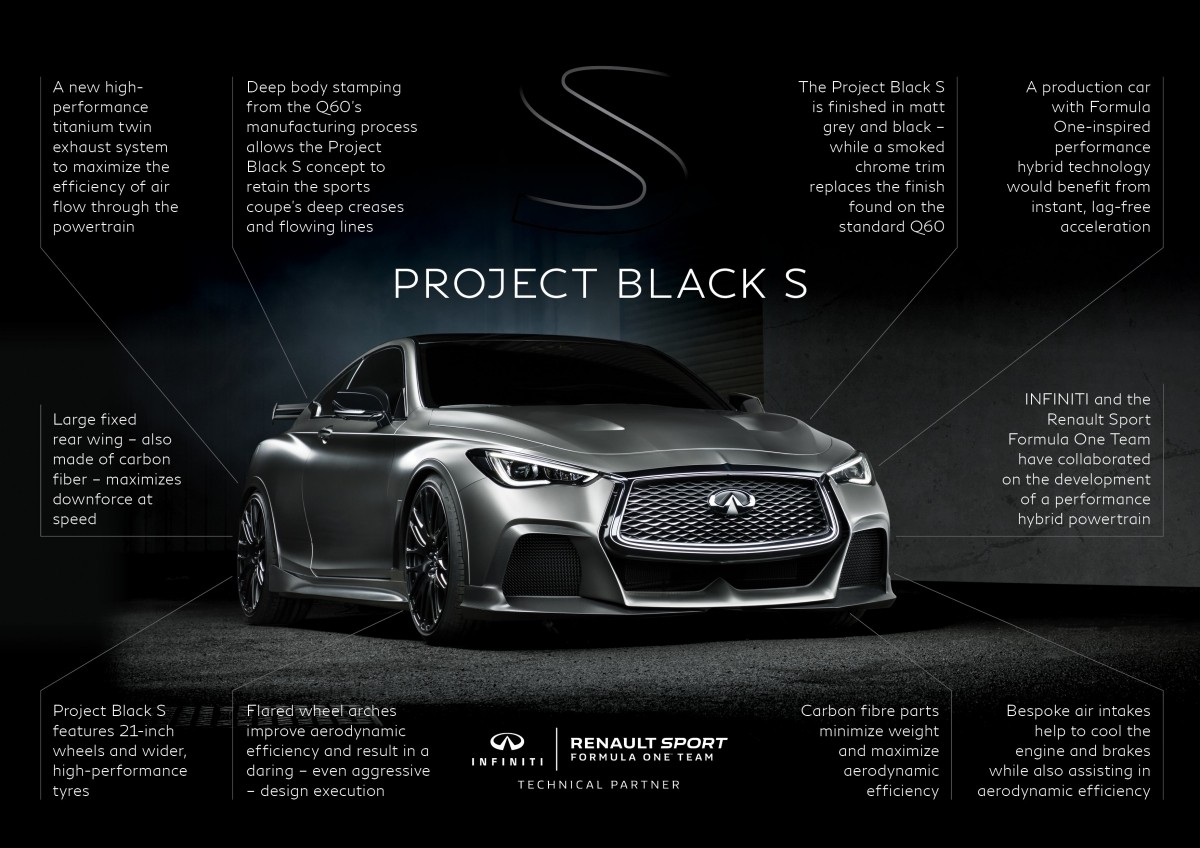 The performance hybrid powertrain being explored through Project Black S features an ‘energy recovery system’ (ERS) to harvest energy, deploying recovered electric power to boost power and torque. The result is instant, significant, lag-free acceleration. Inspired by the dual-hybrid system proven in Formula One, the technology does not yet exist in a current road car.

A new ‘Black S’ grade, showcased by the new concept, could represent the maximum level of performance and dynamic capability offered by Infiniti. The company believes there is potential for a ‘Black S’ grade that offers progressive levels of product enhancement – including higher power and torque from innovative powertrains, new or uprated suspension systems, and unique design elements.

“We are very excited about our ‘Project Black S’ and the work we are doing with Renault Sport Formula One Team on performance hybrid technology,” said Volpe.”Having another key Formula One player involved is proof of the interest it generates and will add even more focus on performance delivery. As we explore the feasibility of ‘Project Black S’, Pirelli’s input and knowledge, both motorsport and automotive, will be invaluable. We couldn’t be happier to have them onboard.”