While Australian team Monash Motorsport scored a memorable 1-3 with its combustion car winning the event outright and its electric car team coming third behind Oxford Brookes Racing, one of the main talking points at this year’s event was the creation and introduction of a driverless element to the competition.

Unveiled by Ross Brawn, who is the Patron of Formula Student, and chief judge Terry Spall, the purpose-designed car, codenamed the ADS-DV, has been designed and developed by DJ Racecars, that has made a name for itself in the motorsport world with its ‘Firehawk’ and ‘Firestorm’ single-seaters along with its expertise in composite components.

Brawn told the packed audience of students that the introduction of an AI competition to Formula Student was a very sensible evolution to ensure the competition can continue to deliver relevant skills to the automotive and motorsport employers.

Spall then explained some of the design decisions that had been made to ensure that students whose focus is on software are able to participate in the competition. “That’s really important,” he said, “Many universities have separate computer science or IT departments, and we want to engage with those as well.”

The new aspect of the competition will ensure that Formula Student will continue to support industry by addressing the skills gap and providing mechanical engineering students with the opportunity for real-world experience of integrated electronics, software and systems engineering.

“The fact that we are introducing a new AI element this year is particularly exciting as AI is already transforming so many industries, including the automotive sector,” said Andrew Deakin, Formula Student chairman. “This new, exciting element to the competition aims to encourage enterprising students to look to the future by designing the software for a fully autonomous Formula One-style vehicle in a safe environment.” 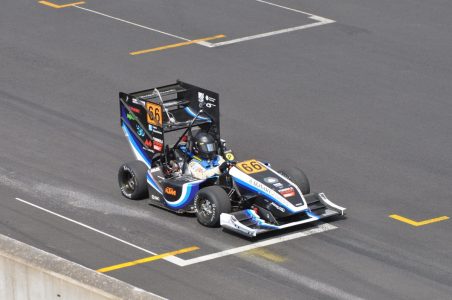 This year, Formula Student attracted g 129 teams and saw engineering students compete for top honours from a number of countries, including many from Europe, but some from as far away as Sri Lanka, Pakistan, India, Mexico and the US among others.

Team AUJ, from the National University of Sciences and Technology in Pakistan, fielded the first all-female team at the UK competition, the team air freighting their car nearly 4,000 miles to get it there. It was presented with the Race Tech Spirit of Formula Student award by Race Tech editor William Kimberley.

“Formula Student, now in its 20th anniversary year has been producing highly sought-after graduate engineers, who have then gone on to very successful careers in leading automotive companies around the globe,” said Terry Spall, Formula Student’s chief judge.

“With the emergence of autonomous vehicle technologies and the possibilities of driverless cars entering the market in the coming years, Formula Student has recognised it has a role to play in producing the new skill sets future automotive engineers will need.”