From left, Roger Penske, Tony George and Mark Miles at the announcement that Penske Corp would acquire Hulman & Co., including the Indianapolis Motor Speedway, IndyCar and other racing-related assets. (Photo courtesy of IMS)

Penske Entertainment Corp, a subsidiary of Penske Corporation, will acquire all Hulman & Company principal operating assets. This includes the Indianapolis Motor Speedway, the NTT IndyCar Series and IMS Productions. This acquisition by the Penske organisation will carry the future of the Speedway and the IndyCar Series forward for the next generation of racing fans.

It was the vision of Carl Fisher to build the Indianapolis Motor Speedway (IMS) in 1909 and the track hosted its first races later that year. Eddie Rickenbacker later purchased the Speedway in 1927 before selling it to Tony Hulman and Hulman & Company in 1945. The news release did not specify how much Penske is paying to buy the track, the NTT IndyCar Series and Indianapolis Motor Speedway Productions. 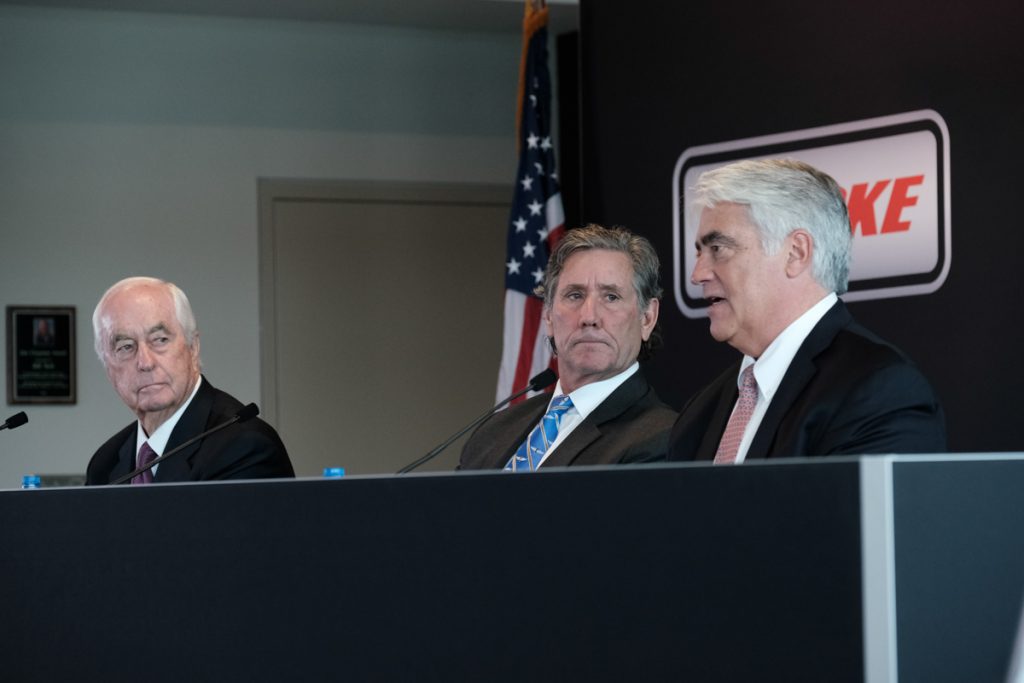 “We recently approached Roger Penske and Penske Corporation about this opportunity and we began working to put an agreement in place,” said Tony George, chairman of Hulman & Company. “The Indianapolis Motor Speedway has been the centrepiece and the cathedral of motorsports since 1909 and the Hulman-George family has proudly served as the stewards of this great institution for more than 70 years. Now, we are so excited to pass the torch to Roger Penske and Penske Corporation, as they become just the fourth owner of the iconic Speedway. There is no one more capable and qualified than Roger and his organisation to lead the sport of IndyCar racing and the Indianapolis Motor Speedway into the future.”

Penske Corporation has a rich history of managing major motorsports properties, beginning with the acquisition of Michigan International Speedway in 1973. Over the course of its history, Penske and its subsidiaries have also operated the Grand Prix of Cleveland, Nazareth Speedway and California Speedway, along with investments in North Carolina Motor Speedway and Homestead-Miami Speedway. Penske Corporation currently promotes and operates the Detroit Grand Prix, hosted annually at the Belle Isle Park street circuit.

“My passion for racing began at the Indianapolis Motor Speedway in 1951 when I attended the Indianapolis 500 with my father,” said Roger Penske, whose race team celebrated its 50th anniversary of first competing at IMS this year. “We have so much respect and appreciation for the history and tradition of the Speedway and the sport of IndyCar racing. I want to thank Hulman & Company for the opportunity to build on this legacy and it will be an honour for Penske Corporation to help lead these great institutions forward into a new era.”

“The Indianapolis Motor Speedway, the Indianapolis 500 Mile Race and the NTT IndyCar Series have enjoyed considerable growth over the past decade, with significant increases in television, digital and social media audiences combined with record attendance at many of our race venues,” said Mark Miles, president and CEO of Hulman & Company. “With their track record of business success, their venue, operation and event experience and their passion for motorsports, Roger Penske and Penske Corporation will help us take the IndyCar Series, the Indianapolis Motor Speedway and all of our properties to new heights. Everyone on our team looks forward to working with them to capitalize on the momentum that the Series and the Speedway have achieved.”