Geek out before the annual curtain raiser in Melbourne

There’s no denying it. Formula 1 is a tech fanatic’s dream. Take them to a grand prix and it’s kid in a toy store time. The sport is awash with innovation and engineering brilliance. And even for those of us who cannot tell the difference between a TAG-320 and a TAG-320B, the technological trickery is just downright cool.

But just what are the tech facts that every F1 fan should know? Well here’s our top five with a McLaren Applied Technologies twist…

If you are a Formula 1 fan and reading this, then you should know by now that the electronic control unit (ECU) for every car on the grid has been supplied by McLaren Applied Technologies since 2008. If you didn’t, where have you been for the last 11 years?

The ECU is the fundamental part of the Formula 1 electronic ecosystem. It controls the engine, gearbox, differential, throttle, clutch, energy recovery system (ERS) and the drag reduction system (DRS). And if that wasn’t enough, it processes and transmits vast quantities of data from the race car to the team.

2019 sees the introduction of a new ECU. It’s called the TAG-320B, and while on the outside it may look identical to its predecessor, under the skin things have become even more exciting. It’s faster and has a significant chunk of extra memory. 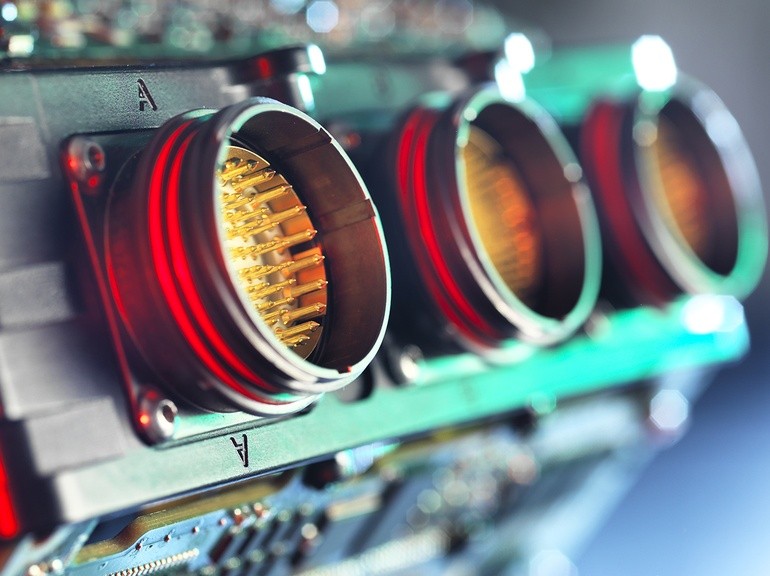 All F1 teams will use McLaren's TAG-320B

Quicker processing means better control over the entire car, which helps teams to eke out every last drop of performance. Meanwhile, more memory means that the amount of possible data logging has been upped to 1,500 parameters, compared with the previous 1,250. They say an elephant never forgets, and surely the same applies to the TAG-320B?

In pre-season testing at Barcelona it reliably covered 40,927 km on track. That’s equivalent to running more than a lap of the Earth’s circumference. And when you consider that the race distance of the season opener is just over 300 km, the Australian Grand Prix should be a cinch!

2. Data analysis has gone up another gear

With more than 300 sensors on a Formula 1 car, over the course of any on-track session, it amounts to millions of individual data points. When combined with other relevant data, such as the location and speed of the car on track compared with every other car, engineers are equipped with a vast wealth of information. And with ATLAS this can be used to monitor car performance in real-time. 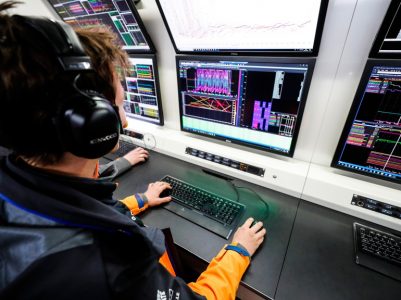 ATLAS 10 brings with it a host of new features. Forward Cursor uses machine learning to act like a crystal ball for teams. It allows them to see into the future by predicting anything from tyre wear and fuel consumption to even the weather, based on its constant analysis of the data it receives as a session evolves.

The latest iteration also features open software architecture which means that engineers can input data from third party software tools into ATLAS 10 which will then process the information. It means that this data can be easily viewed by the rest of the team and combined with a host of other data sources to conduct an even greater level of detailed analysis.

3. A tyre pressure sensor must withstand temperatures over 100°C

Okay, so now you know there are over 300 sensors on a Formula 1 car, but did you know that McLaren Applied Technologies supplies many of them, and has been sole supplier of engine pressure and temperature sensors to Formula 1 since the start of 2018?

Sensors are vital to the safe and competitive operation of race cars, and we’ve been at cutting-edge of sensor technology for decades. Our Tyre Pressure Monitoring System (TPMS) for example, measures not just pressure but temperature as well. And on the back of our experience in Formula 1, we’ve developed similar systems for IndyCar, NASCAR and MotoGP. 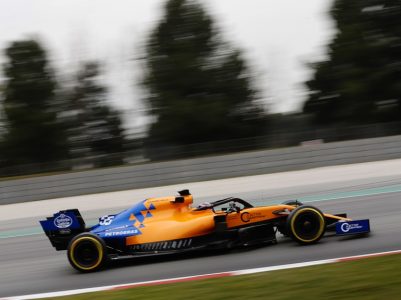 Each F1 car sports over 300 sensors

What makes the TPMS so good is that it performs in the hostile environments presented by Formula 1; namely a tyre operating at over 100°C and enormous rotational force. It takes this in its stride, and relays highly accurate data back to the garage lap after lap to deliver crucial insights into reliability and performance.

4. All F1 cars have a dashboard in common

No two steering wheels are the same in Formula 1, with buttons, dials, paddles and even grip size honed to each driver’s liking. However, one thing they all have in common is the same digital dashboard.

When we say ‘all’, there has been one exception in recent seasons. Williams buck the trend by mounting the digital dashboard inside the cockpit, on the car itself. There’s always one isn’t there… 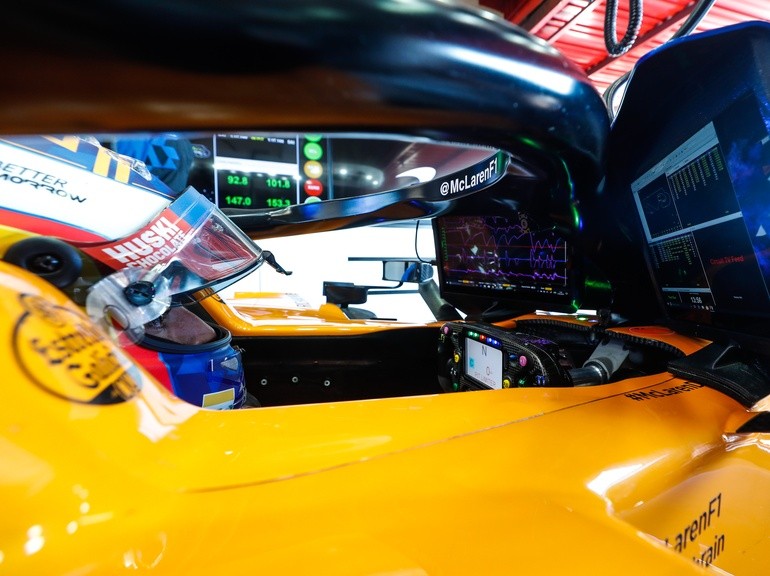 Digital dashboards are standardised in F1

Nevertheless, every single dashboard up and down the grid is supplied by McLaren Applied Technologies, and has been since 2008. McLaren has been at the cutting-edge of in-car display technology ever since we developed a bespoke, lightweight dashboard as part of a host of weight-saving measures for the MP4/8.

So the next time you’re squinting at your television screen to eagerly see a driver’s own lap time delta and gear shift selection when riding on-board, you know you’re looking at a little piece of Woking that could give the Las Vegas Strip a run for its money when it comes to illumination.

5. An F1 driver experiences double the g-force of an astronaut

We’ll admit, this one may not strictly be about the tech, but it does come as a direct result of the racing machines at drivers’ disposal which seemingly defy the laws of physics. Speeds of over 200 mph, neck-wrenching deceleration under braking, and mind-bending grip through the corners thanks to large helpings of downforce mean that drivers are subjected to incredible levels of g-force.

High-speed corners like Suzuka’s infamous 130R are home to the most lateral g, while the dramatic elevation change of Eau Rouge makes it the king of vertical g. Martin Brundle put it best when he said: “You had better hold onto your heart in Eau Rouge, otherwise it will come out of your throat.” 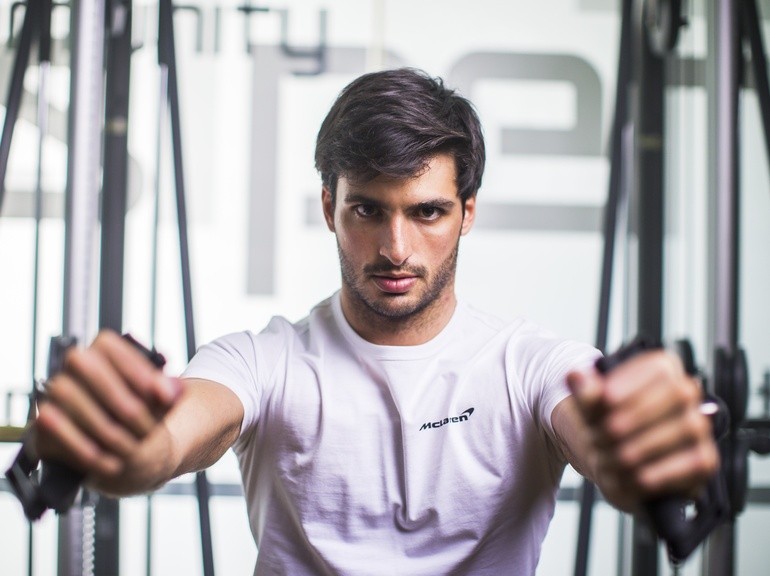 Drivers can expect to deal with 6 g

During a space shuttle launch the crew would pull 3 g. A Formula 1 driver can expect to experience double that. Just the thought of this might make you shed a tear, and for the drivers the reality really does – fluid can be ripped from their tear ducts, splashing the inside of their visor.

The effects of g-force are about more than just waterworks though. It makes your body feel significantly heavier and reduces blood flow to your brain, impairing vision, triggering dizziness and disorientation. It also places considerable strain on the muscles to the side of neck and shoulders. These are all things are not conducive to driving a standard road car, let alone a multi-million-pound, high speed single-seat racer.

With their bodies under immense strain, it’s up to the McLaren Applied Technologies human performance team to ensure that Carlos and Lando are at peak physical condition ahead of the season and stay that way for its duration. They can look forward to countless hours of rigorous training to ensure strength and endurance, and have already become very well acquainted with the Technogym equipment here at MTC.