Integral Powertrain Limited has been awarded the Royal Automobile Club’s coveted Dewar Trophy, which honours outstanding technical achievement and innovation in the British automotive, for the development of the integrated electric motors and inverters which powered the 2018 Pikes Peak winning car.

The Volkswagen I.D. R Pikes Peak fully electric car was the most innovative and complex car ever developed by Volkswagen Motorsport. As technical partner to the project, Integral e-Drive, the electric drive division of Integral Powertrain Limited, played a vital role in its record-breaking success. The company provided the highly sophisticated electric motors designed specifically to power the Volkswagen I.D. R, giving it the competitive edge to outperform at the high altitude and challenging turns of the Pikes Peak Hill Climb.

Romain Dumas raced in to the history books in June this year with the 500 kW (680 PS) Volkswagen I.D. R Pikes Peak electric car, setting a record of 7min 57.148sec through the 156-corner 12.42-mile course. In doing so, he not only broke the record for electric vehicles, but bettered Sébastien Loeb’s all-time record from 2013 by a full 16 seconds. The electric car proved faster than any internal combustion-engined car and set the fastest time in the hill climb history, which spans more than 100 years.

Making the award, Dewar Technical Committee Chairman, John Wood MBE, said “Integral Powertrain’s development of the integrated motors and inverters that powered the 2018 Pikes Peak winning car in America is, quite simply, an astonishing achievement.  Nothing else comes near in terms of the combination of power and torque densities coupled with such high efficiency.  This success speaks volumes for the intensely focused and determined approach to pushing the boundaries of technology that clearly exists at Integral Powertrain.”

Receiving the Dewar Trophy, Roger Duckworth, a director of Integral Powertrain said: “On behalf of Integral Powertrain Limited, I am absolutely delighted to accept such a prestigious award on behalf of the team. It’s a great honour to be recognised for our work with the Volkswagen I.D. R project and join such an elite roll of past Dewar recipients including Mercedes-AMG, McLaren Automotive, Jaguar, Ford, Ricardo and GKN to name but a few.”

Roger’s late father Keith Duckworth was awarded the Dewar Trophy in 1969 for the design of the Ford DFV engine, which went on to such remarkable success, particularly in Formula 1

The Dewar Trophy caps off a very successful year for Integral Powertrain Limited. The Milton Keynes based company recently announced its collaboration with Williams Advanced Engineering as e-Drive technology partner for the first all-electric Aston Martin Rapide E. The limited production of 155 cars to be built at Aston Martin’s St. Athan site, will deliver four-door sports car looks and dynamics of the Rapide S powered by an all-electric powertrain replacing the six-litre V12 engine.

The Aston Martin Rapid E will use two electric motors to drive the rear wheels. These motors will deliver cutting edge technology for a road car, with a peak efficiency of over 98% and torque density greater 17 Nm/kg, giving rated power and torque of 460 kW and 950 Nm respectively. The motors were already in development for Aston Martin prior to selection of the technology for the VW I.D.R Pikes Peak project. 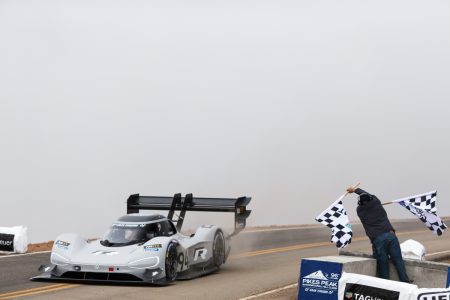