A round-up of F1 testing in Barcelona – Day Two

Ferrari, Mercedes and Red Bull all topped the timesheets in Day Two of F1 testing at the Circuit de Barcelona.

It was  Kimi Raikkonen’s first day at the wheel of his new Ferrari SF70H but proved very successful on soft tyres after setting the best time of 1m 20.960. He was just ahead of Mercedes’ Lewis Hamilton who was only 00.23 s slower with a time of 1m 20.983s.

Red Bull had a better day with driver Max Verstappen, following technical issues on the first day with Daniel Ricciardo. Verstappen drove 89 laps in its new RB13 and set the third fastest time at 1m 22.509s.

Kevin Magnussen in Haas’ VF-17 was only 0.004s off Verstappen placing fourth and completed an impressive 118 laps. Watching on was team owner Gene Haas, having arrived fresh from seeing his NASCAR squad take Daytona 500 glory.

Esteban Ocon made his first track appearance as a Force India race driver. Technical problems stopped the Frenchman out on circuit in the morning, but in the afternoon he displayed excellent pace in the Mercedes-powered VJM10 as he went fifth quickest overall, just ahead of Toro Rosso’s Daniil Kvyat. 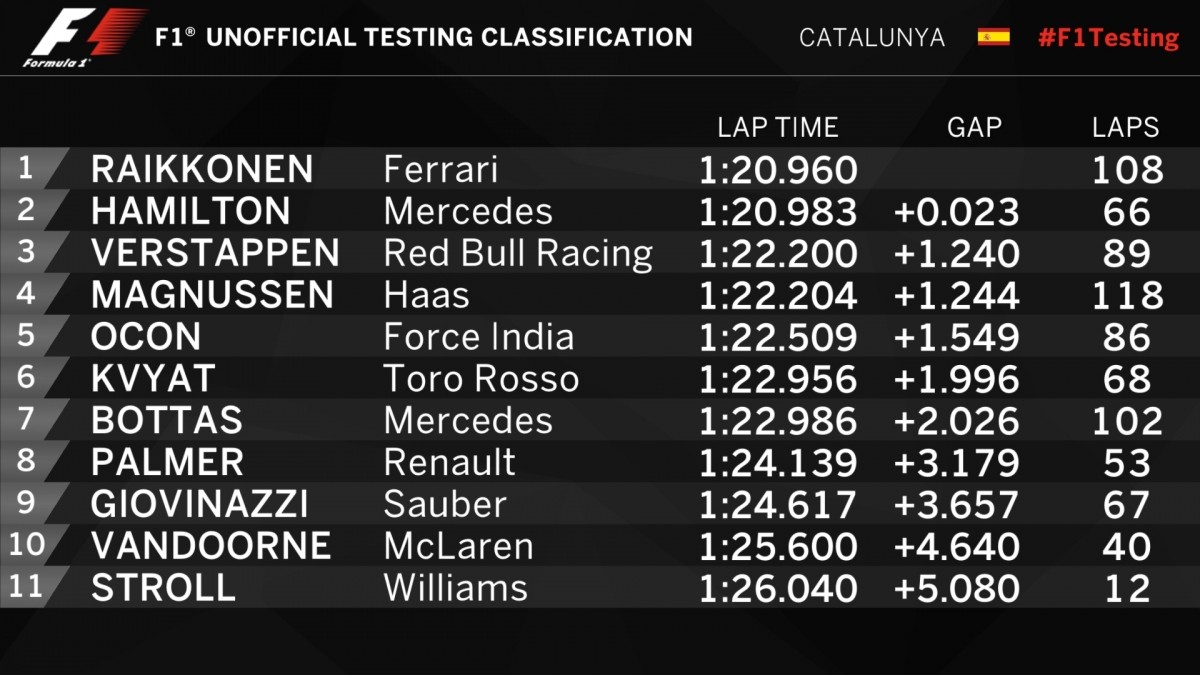 Renault’s Jolyon Palmer managed just a single installation lap in the morning session, but the Briton recovered to rack up the mileage on the new R.S.17 in the afternoon. The result was a lap total of 53 and eighth place on the timesheet.

At Sauber, Ferrari third driver Antonio Giovinazzi made his official F1 test debut, standing in for the injured Pascal Wehrlein. It was not the best of starts for the young Italian, his C36 machine requiring an early power unit change. Matters improved in the afternoon, however, and he racked up 67 laps en route to ninth place.

It was another troubled session for McLaren, with further technical woes forcing the team to make their second Honda power unit change in as many days. It meant Stoffel Vandoorne’s first outing in the MCL32 totalled 40 laps, with the Belgian 10th in the times.

Finally, Williams were forced to abandon their programme at lunchtime, after what had looked to be a minor spin into the gravel for rookie Lance Stroll turned out to have caused significant damage to his car. The Canadian was last in the times at the day’s end, with just 12 laps on the board.

A round-up of F1 testing in Barcelona -Day One