Why SEMA is the place to be

This is the time of year when exhibitions and shows land one after another for the motorsport industry.

Some are worth attending, others are just making up the numbers and cashing in what is presumed to be an industry with a bottomless pit of money. While the Performance Racing Industry show in Indianapolis is one of the most important shows on the calendar, closely followed by Autosport International, the one that is perhaps the big daddy of them all is the Specialty Aftermarket Manufacturers Association – SEMA – in Las Vegas.

Admittedly it’s not so much focused on motorsport, but there is nevertheless a huge motorsport content within its halls. Outside in the Ford Performance arena, you can see various performance Fords doing all sorts of crazy stunts including drifting. 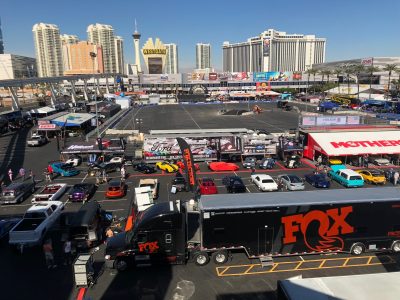 It’s also becoming a place where leading motorsport people attend. I have personally caught sight of Jost Capito and spoken to Bobby Rahal, and that was just within the first few minutes of coming to the show.

At first glance you might be put off. Looking at some extremely crazy vehicles, ones that are jacked up as if on steroids, others that hug the ground so tightly that if they went over a pebble, let alone a sleeping policeman, it would rip the underside. However, don’t be put off, there are serious products and technology on show if you know where to look.

There are two other benefits of this show. One is that it’s in Las Vegas, although some may turn their nose up at that, and the other is that you have very sunny weather and bright blue skies. Think I made the right choice coming here.