McLaren has released details of the 620R that it claims is the first car in its class to offer true motorsport credentials in a fully road-legal package. The limited edition coupé – just 350 will be built – evolves the competition specification of the McLaren 570S GT4 to deliver a race-car experience on either track or road.

“The McLaren 570S GT4 is a first-class GT race car that having won races in every championship it has competed in since its first appearance in 2017 is attracting an increasing number of customer racing teams,” said Mike Flewitt, chief executive officer, McLaren Automotive. “Now, in response to repeated customer requests, we have homologated that class-leading package for the road in the new McLaren 620R, a limited-edition, 620 PS superlight coupé that is the perfect choice for an enthusiast wanting an authentic motorsport driving sensation – and performance to match – on both track and road.” 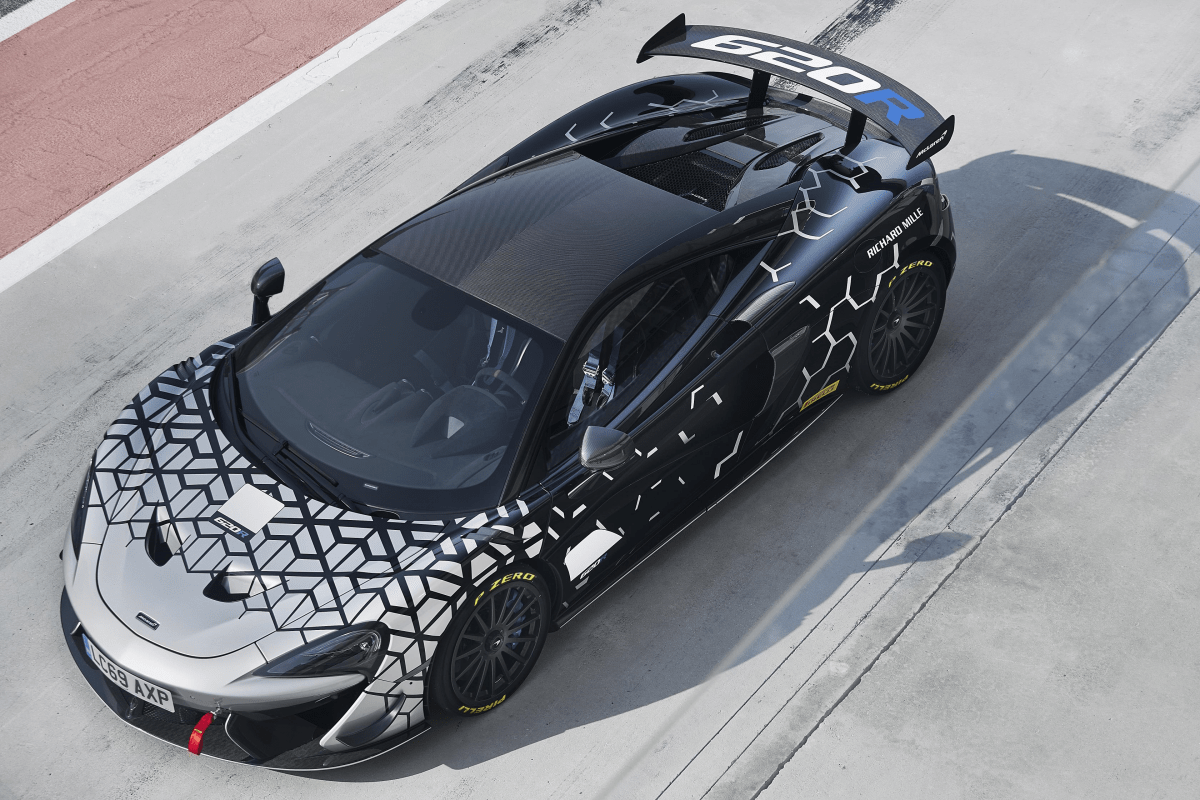 McLaren has enjoyed significant GT race success with customer racing teams and in recent seasons the 570S GT4 has been instrumental in adding to that record of success. Since the customer debut in 2017, the car has become the most successful GT race car built by McLaren, achieving more race wins and podiums than any other to date. As the ultimate track-focused, track-ready but roadgoing McLaren Sports Series model, the McLaren 620R celebrates the achievements of the 570S GT4. 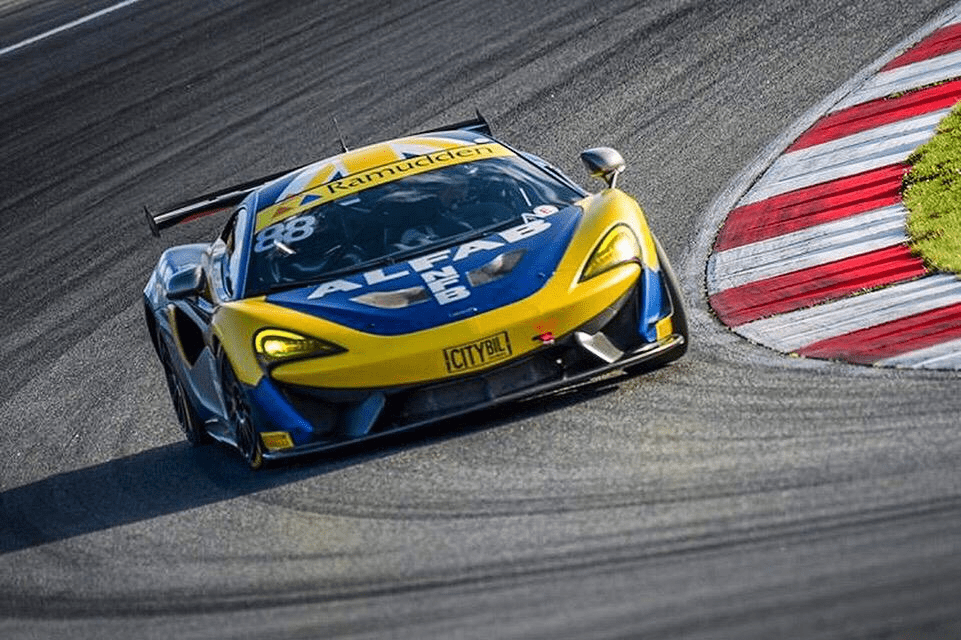 A high level of commonality with a 570S GT4 race car has been integral to the development of the 620R from very outset. They have the same, single-piece carbon fibre Monocell II chassis providing the foundations for the strength and light weight of the car, with a targeted lightest dry weight of 1,282 kg. This carbon fibre core – a McLaren signature that in different guises features in every car in the company’s range – also underpins the dynamic precision and composure for which McLarens are renowned. These characteristics have been enhanced in the 620R by the inclusion of the GT4’s adjustable aerodynamic elements, race-derived suspension components and powertrain re-calibration to increase power and performance.

The 620R has the same M838TE 3.8-litre twin-turbocharged V8 engine used in the GT4 car, but with a significant difference in power output; freedom from racing regulations has allowed the engine ECU and turbocharger management to be reconfigured to achieve 620 PS (610 bhp), making this the most powerful Sports Series car yet. The engine also develops torque of 620 Nm (457 lb /ft) and even with lap times more important than sheer top speed, the combined outputs helps to deliver benchmark performance figures of 0-100 km/h (62 mph) in 2.9 seconds and 0-200 km/h (124 mph) in 8.1 seconds. Maximum speed is 322 km/h (200 mph). 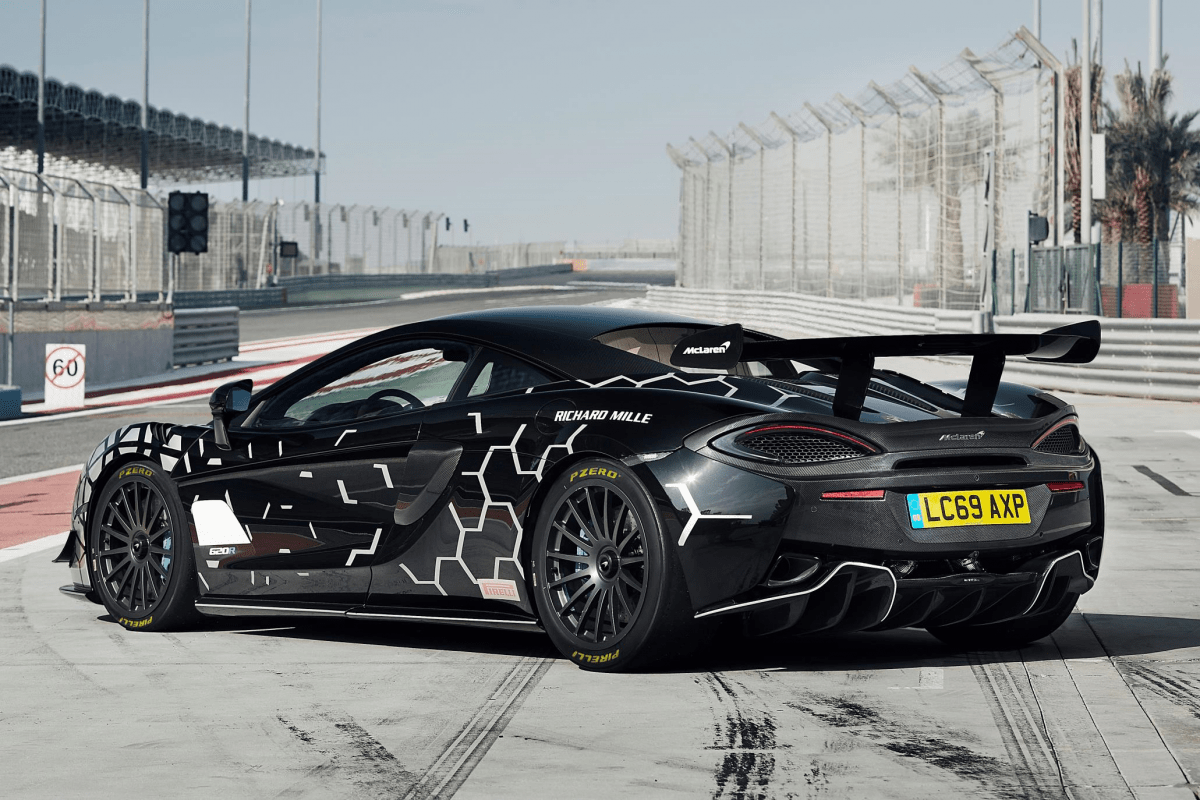 The use of stiffer powertrain mounts reduces drivetrain forces under acceleration, minimising the effect of inertia under high load, while the 7-speed Seamless Shift Gearbox (SSG) delivers super-fast shift times, further aided in Track model by McLaren’s Inertia Push technology, which converts built-up flywheel energy into a momentary burst of torque on upshift. For added drama on the road the driver can select Sport mode and hear the upshift ‘crack’ created by a split-second cut of the ignition spark during a gearshift.

Fitment of the GT4’s two-way manually adjustable coilover motorsport dampers, which feature 32 clicks of adjustment per corner to allow a driver to tailor compression and rebound rates to suit their driving style and track conditions, adds to the 620R’s motorsport credentials. The dampers also help to bring weight down overall, being more than 6kg lighter than the regular Sports Series units. 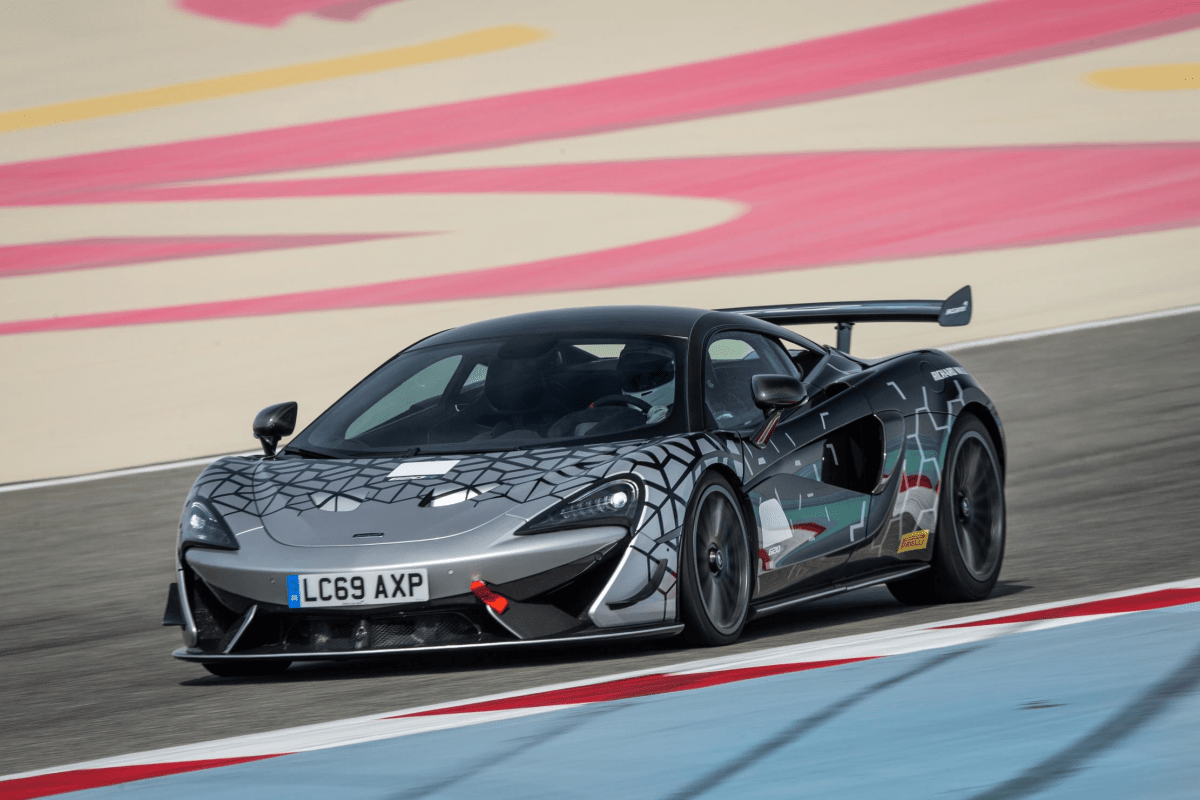 The suspension which features lightweight aluminium wishbones and uprights and stiffer anti-roll bars and springs than fitted on a regular Sports Series model, is further enhanced by swapping rubber top mounts for solid stainless steel alternatives to provide noticeable improvements in steering control and feedback, above and beyond the very high standards enjoyed in all McLaren cars.

The braking performance is unsurprisingly also extremely impressive on the road, where the 620R runs as standard with Pirelli P Zero Trofeo R semi-slick tyres, but drivers who swap to the optional, full-slick motorsport tyres when they arrive on circuit will experience a whole new level of braking. Specially developed for McLaren by Pirelli’s motorsport team, the slick tyres are optimised to complement the motorsport brakes and race-derived suspension of the 620R. They unlock a contact patch 8% larger than that of the road tyre, increasing lateral G-forces and enabling quicker lap times. 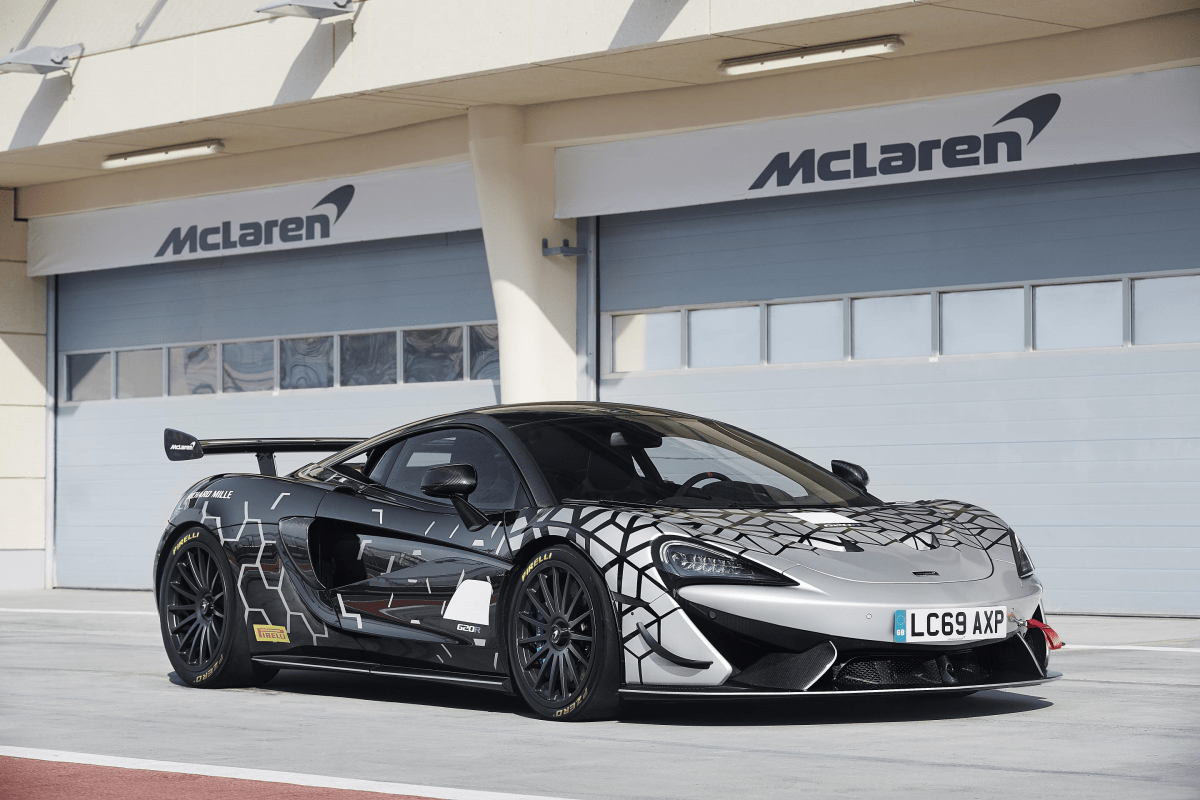 This is the first time that a road-legal car with 19-inch front wheels and 20-inch rear wheels has been engineered to be able to run on slick tyres without the need for additional mechanical adjustment. This means that if weather conditions allow, owners can on arrival at a circuit either fit a second set of wheels or change tyres and go straight out on track without further delay.

High levels of mechanical grip are an essential part of the 620R’s track parentage, but it is the car’s aerodynamic performance that elevates it to the status of a road-legal GT4 racer. The adjustable carbon fibre rear wing is the same component fitted to the 570S GT4. Raised 32 cm (12.5 in) into the cleaner airflow above the vehicle to increase downforce while minimising drag, the wing is road legal thanks to its newly incorporated third brake light. 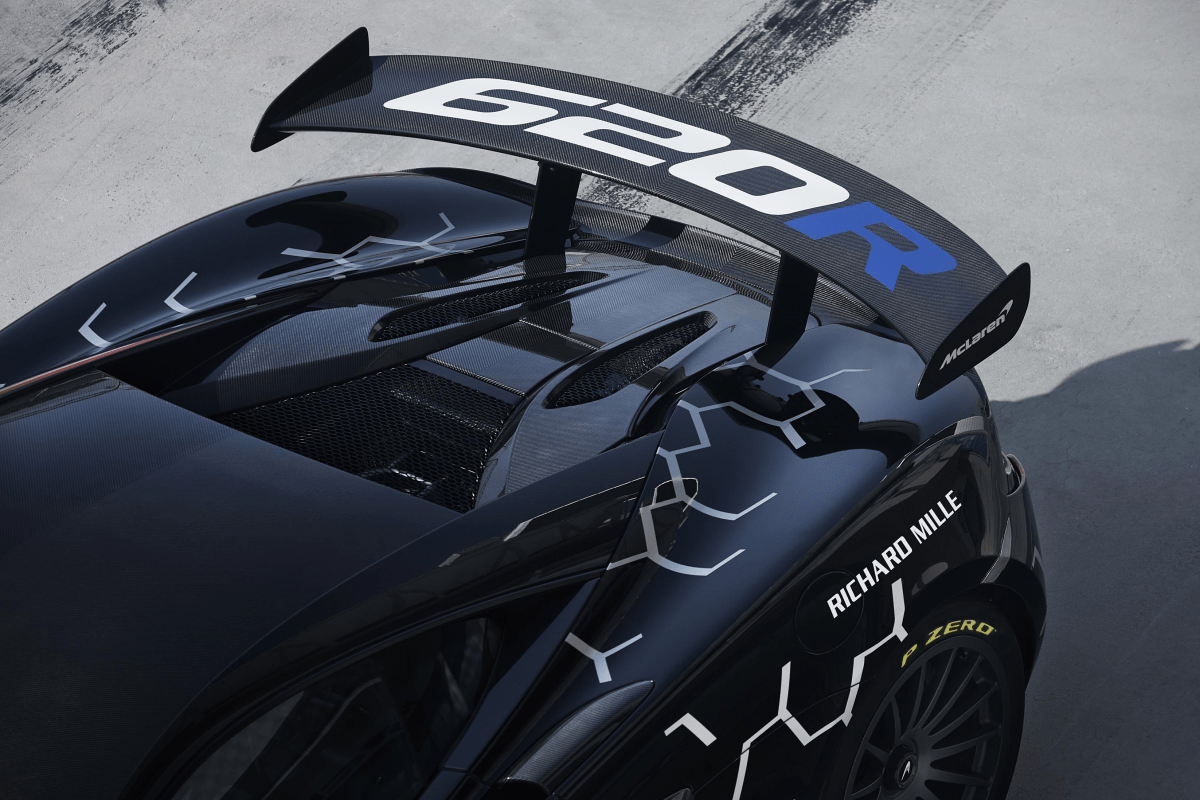 Customers will receive their cars with the wing set to the least aggressive of its three available angles, optimising front/rear balance for road driving. The more aggressive angles – which can be set by a McLaren retailer – increase rear downforce still further, contributing to a maximum of 185 kg (408 lb) and enabling even quicker circuit-running.

While the rear wing quite literally stands out as an obvious distinguishing feature on the 620R, it is not the only component adapted from the GT4’s aggressive track specification to meet road homologation standards. The front bumper, splitter and bonnet have been redesigned – the splitter retaining pronounced aero blades and cut-out – while the carbon fibre bonnet has twin nostrils to aid downforce and clean up the airflow over the top of the car. Downforce at the front of the car is further increased by dive planes that create vortices of low-pressure air at track level and help accelerate airflow along the car’s sides, as well as significantly aiding brake-cooling. The dive planes contribute up to 30 kg (66 lb) of downforce as part of the 65 kg (143 lb) delivered by the full frontal aero package. 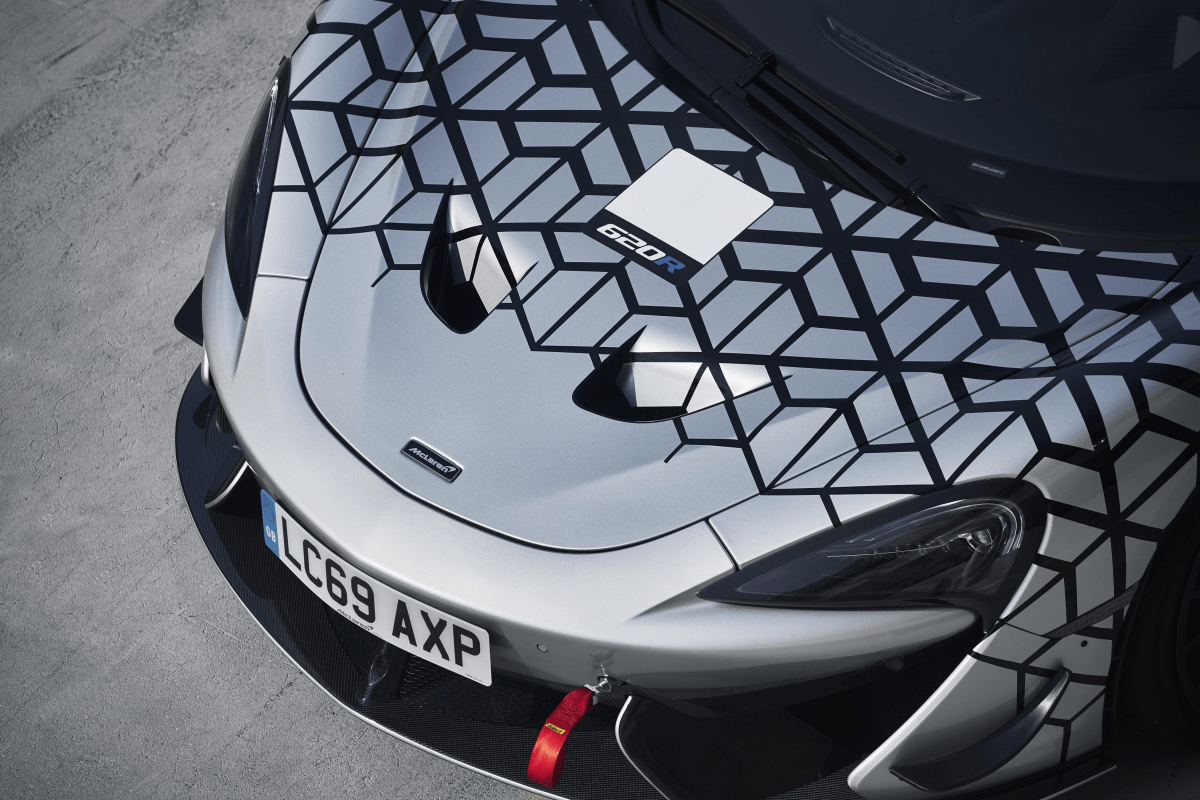 The performance, feel, feedback and handling characteristics of the 620R will leave a driver in no doubt that it is a race car at heart, but there are other obvious clues that are apparent before the engine is even started. The interior clearly and immediately stands out as track-inspired – any GT4 race driver will feel instantly at home. As with any serious circuit car, it is as much about what has been stripped out as what has been included – the 620R does not have a floor carpet or a glovebox. Air conditioning, IRIS Navigation and an audio system are also missing from the standard specification, although all can be selected at no additional cost. A lightweight Bowers & Wilkins upgraded audio system is also available, as a cost option. 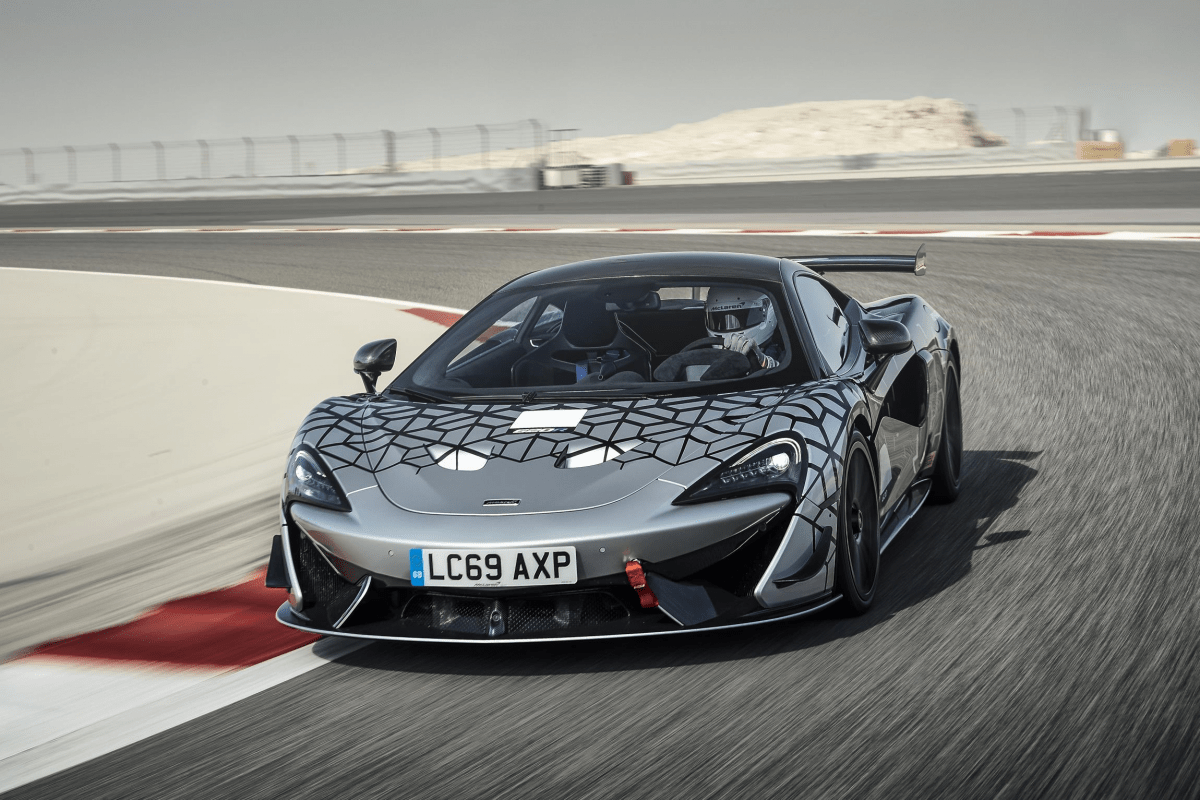 Driver and passenger are secured in super-lightweight carbon fibre racing seats by six-point racing harnesses, fitted as standard. Key ‘track touchpoints’ include the red 12 o’clock mark on the steering wheel and door pull straps to aid door closure when a driver is held in place by the harnesses. Structural carbon fibre elements such as extended shift paddles, steering wheel spokes and centre console enhance the sense of being in the cabin of a race car.

A McLaren Track Telemetry (MTT) system is standard and is displayed on a centre-mounted 7-inch touchscreen. If buyers specify the optional MSO Roof Scoop Upgrade Pack, which features the striking scoop first seen on a Sports Series at the Pebble Beach Concours d’Elegance in 2018, the MTT system can be upgraded to include the three-camera system that is also available as a standalone option.

Each 620R features a dedication plaque on the centre console with numerical identification (1 of 350; 2 of 350, etc). As with every McLaren road car, each 620R can be configured to be distinctively individual. Single elements, for example the colour of the brake callipers, can be chosen as a solus specification; alternatively, buyers can opt for upgrade packs such as the Gloss Finish Visual Carbon Fibre Exterior Pack, which adds visual drama to everything from the side intakes to the door mirror casings. McLaren Special Operations (MSO) provides further personalisation choices, with a range of MSO Defined Exterior options that includes a titanium SuperSports Exhaust with Nano Black Exhaust Finisher and MSO Defined interior upgrades that incorporate a choice of harness colour.

All three exterior colours available as standard on the 620R are inspired by GT4 race cars – McLaren Orange (with white racing stripes), Silica White (orange stripes) or Onyx Black (orange stripes) – and each can be optioned with race number decals and/or partner decals. Further body colours are available in the MSO line-build palette. An even more exclusive decal livery inspired by the McLaren Senna GTR is also available.

620R production will be limited to just 350 customer orders, all hand-built at the McLaren Production Centre in Woking, Surrey. Production will begin in January, with each car costing from £250,000 including taxes (UK); for buyers purchasing in Europe and the USA, the price includes a Pure McLaren Track Day, with expert driving tuition at a race circuit. 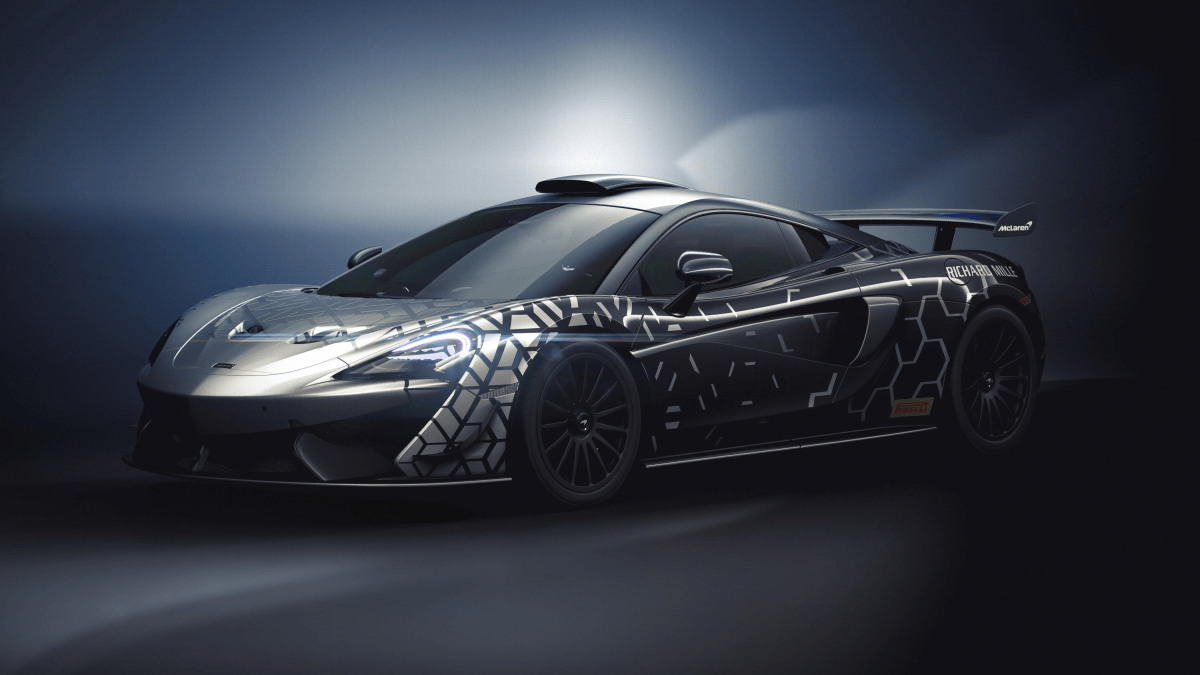