McLaren has been working with Swiss company Bcomp, the sustainable lightweighting specialist, to develop a natural fibre racing seat for Carlos Sainz and Lando Norris. It is the first F1 car part to be made of renewable textile fibres. By optimising the mechanical properties of flax fibres through fabric architecture, it has been possible to make a seat with the required strength and stiffness, but with a 75% lower CO2 footprint compared to its carbon fibre counterpart.

“The use of natural fibre composites is the latest example of pioneering, composite materials innovation at McLaren,” says Andreas Seidl, McLaren F1 team principal. “Not only does this solution provide equivalent performance to carbon fibre, it represents another step forward in our evolving sustainability programme, while underlining our commitment to helping F1 turn its ambitious sustainability strategy into action.”

“For decades, F1 has been an innovation lab for technology that has transformed not just motorsport, but the automotive industry and beyond,” adds James Key, McLaren F1 technical director. “The sport must continue down the road of getting to an increasingly environmentally friendly set of conditions, and our development and application of natural fibre composites is an example of how we’re accelerating this journey, as well as the ongoing evolution towards cleaner mobility.”

This is a sentiment that is echoed by Christian Fischer, Bcomp CEO and co-founder: “Sustainability and decarbonisation is a global issue, and it is fantastic to see motorsport embrace carbon alternatives, paving the way for widespread adoption within large-scale mobility applications. McLaren has always been a pioneer within the sport, in terms of both composites and sustainability, thus it feels like the perfect match and a great honour to collaborate with such a prestigious brand.” 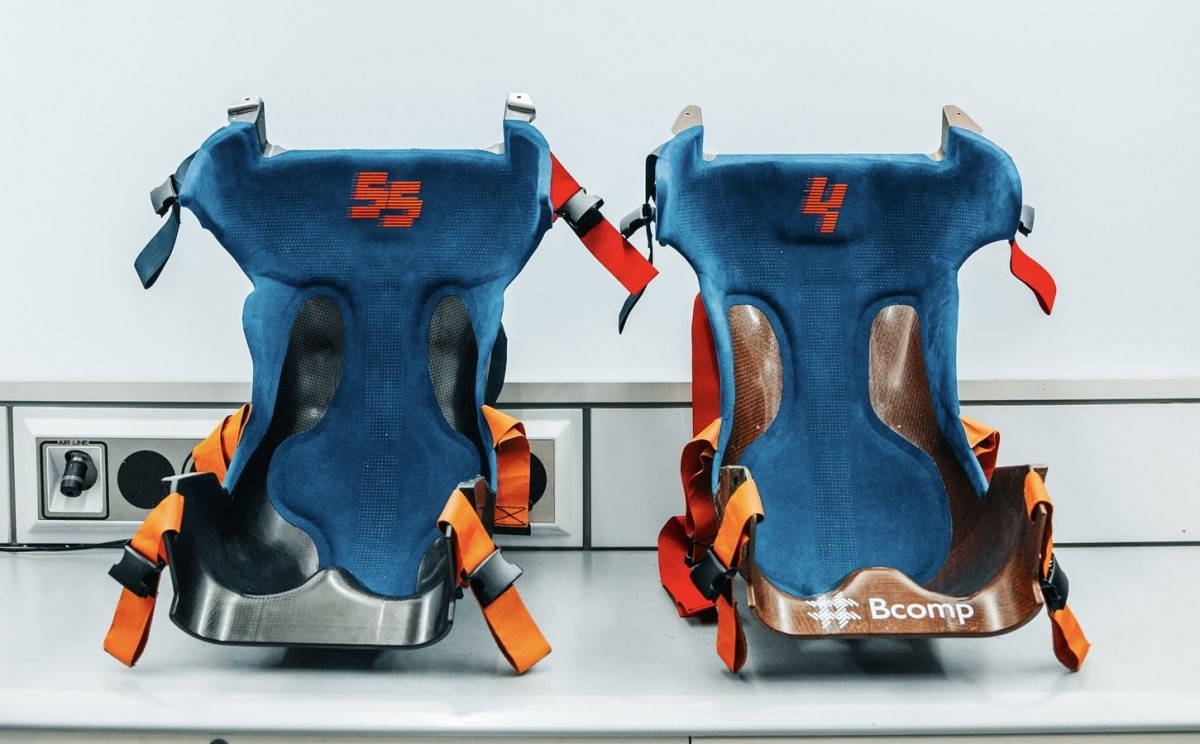 What is flax and how is it used in the natural fibre composite seat?

Primarily used in the production of linen, flax is an incredibly versatile plant that has been around for millions of years. It differs from many biomaterials in that it is ideal for use in crop rotation programmes and can be grown without directly competing with food crops. Flax is a CO2-neutral raw material and its fibres are biodegradable. At the end of the seat’s life, for example, it can be ground down into a new base material or thermally recycled without residual waste, rather than end up in landfill.

Inspired by the thin veins on the back of leaves, Bcomp’s proprietary powerRibs technology provides a three-dimensional grid structure on one side of the seat, which is then used to reinforce Bcomp’s optimally spun and woven flax fibre reinforcement fabric, ampliTex. Made by twisting flax fibres to form a thick yarn, the powerRibs act as a backbone to the ampliTex flax fabric that is bonded to it.

McLaren saw a clear opportunity to use this technology in this area of the car based on the current F1 technical regulations. Since 2019, a minimum driver weight of 80 kg has been mandated, and if a driver weighs less than that, ballast must be used to bring them up to the minimum weight. However, instead of allowing this ballast to be placed in other areas of the car, which could improve weight distribution, it must be located within the immediate area of the driver’s seat.

“With the introduction of the new regulation in 2019, the seat now forms part of the driver’s weight budget, so it’s overengineered as a result,” explains McLaren F1 principal composites engineer Steve Foster, “and with Carlos and Lando weighing in at 72 kg and 68 kg respectively, there’s plenty of scope to do that. It meant that, if we needed to, there was margin to use additional bio-composite material to ensure sufficient strength and stiffness in this safety-critical component.

“The original carbon fibre seat design was reverse-engineered by Bcomp, and then we optimised and manufactured the new design. The seat was run in pre-season testing without any problems and we hope to be racing with Bcomp flax seats in the near future.”

“We believe this seat functions as a conclusive demonstration that our technologies are ready to compete in the top tier of motorsport,” adds Fischer. “We match conventional carbon fibre while lowering the eco footprint by 75%, cutting costs, reducing vibrations and improving safety – all of which are highly relevant to achieving a sustainable future for motorsport and mobility.” 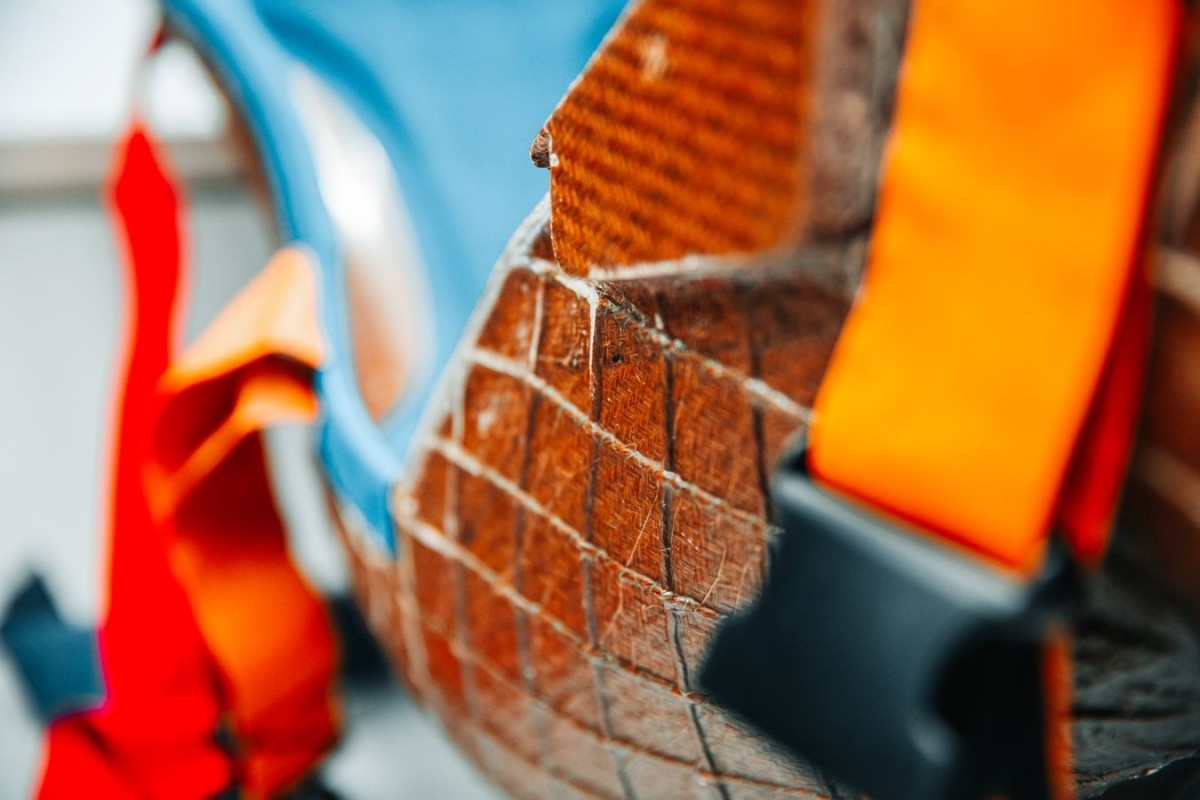 While the environmental benefits are clear, the mechanical properties of flax make it an attractive renewable raw material for high-performance composites. The tubular structure of flax fibres provides low density and high stiffness, which affords the opportunity to reduce weight while simultaneously improving vibration damping, as well as resistance to breakage, torsion and compression.

Lightweighting is nothing new in motorsport and neither is the use of carbon fibre to achieve it. Lightweighting has been a crucial element of F1 car design for decades, as teams have sought to decrease weight to enable higher speeds and greater fuel efficiency, while retaining robust construction and preserving strength. Meanwhile, carbon fibre has long been a part of McLaren’s DNA. When it broke new ground with the MP4/1 in 1981, the car challenged conventional thinking on monocoque materials and construction. It set the trend for the cars that would follow in F1 and laid the groundwork for material innovation that has become a hallmark of McLaren.

Just as it did in 1981, McLaren is looking to stay ahead of the curve which is why it is exploring the use of natural fibre composites which have the potential to be the next, sustainable, step forward in lightweighting. Flax fibres, for example, are 9% lighter than any equivalent carbon material and are five times better vibration damping due to Bcomp’s ampliTex flax fabric and powerRibs technology. Greater vibration absorption and impact resistance makes the natural fibre material well suited to use in the driver’s seat. It improves comfort and reduces vibration in the cockpit, which can have a fatiguing effect on drivers, especially over a race distance and particularly at circuits with aggressive kerbs.

When it does break, unlike carbon fibre, it’s not prone to brittle fracture and splintering – a property that’s enhanced further by the structure of Bcomp’s powerRibs which stiffen and confine the damage zone. “The composite of ampliTex and powerRibs is not as fragile, and while it still breaks, the softer debris remains attached to the main structure with the help of the powerRibs, which help dissipate the energy,” says Fischer.

The ductile fracture behaviour of natural fibre composites opens the door to other possibilities too. One of the most spectacular, but equally dangerous, aspects of an on-track incident are the shards of carbon fibre that result from a collision. Not only do they present an immediate risk to the drivers, they are notorious for causing punctures and leaving a driver’s race in tatters. By using natural fibre composites in other areas of the car, such as front wing endplates and the floor, it’s possible to reduce carbon fibre debris and therefore the risk of punctures. 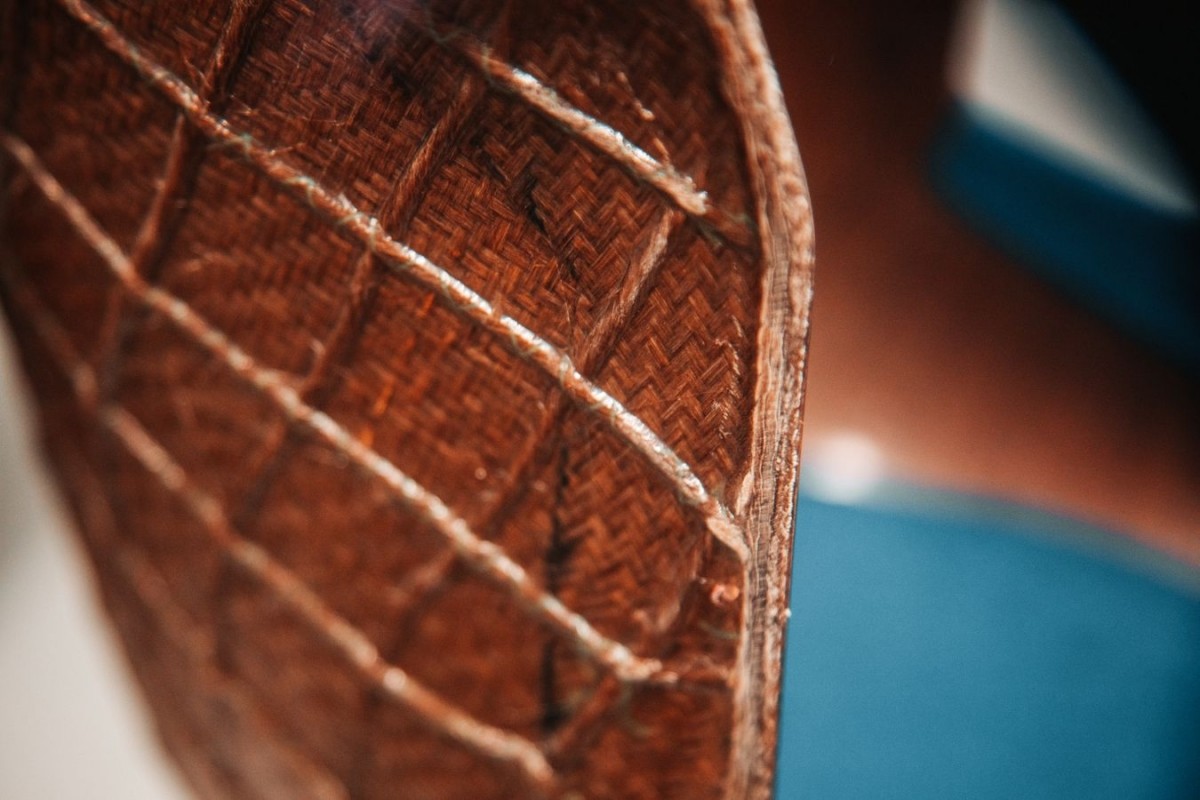 The advantages do not stop there. With a budget cap set be introduced from 2021, many F1 teams will need to reduce costs while maintaining and improving performance. Teams are going to have to work even smarter, and with Bcomp’s ampliTex and powerRibs solutions reducing raw material cost by up to 30% compared to traditional carbon fibre, this significant saving can free up budget to explore other ways of improving car performance.

“With the introduction of the budget cap, the cost of materials is going to be a big focus and the use of natural fibre composites has the potential to help in this area,” says Key. “We’re working with Bcomp to confirm that natural fibre composites are a viable, sustainable and economical substitute for carbon fibre in some applications, both on and off the car.

“Looking outside the sport to find new technologies is a crucial driver of innovation that can deliver unique competitive advantage. Through the experience gained this season, we’ll have learnt more about sustainable composite materials and the potential for their application in the future.”

“Where we see significant potential is in the non-critical, semi-structural areas of the car, such as the driver’s seat, as well as off the car,” says Fischer, and it’s the latter, reveals Foster, where the immediate scope for further adoption of natural fibre composites really lies: “When used intelligently, the flax fibres reduce weight and cost, while maintaining and, in some cases, even improving performance. There are a range of possible applications beyond the car itself, including pit gear, truck panels, packing cases, timing stands and mould tools.”

Take mould tools, for example. Currently, most of the moulds used to make parts of the car, are made of carbon fibre composite because it has low thermal expansion. However, flax fibres also possess this property, potentially making them a suitable tooling material for moulding performance parts that are made from standard composites. So even if the part being produced is not made from natural fibre materials, the tool to produce it can be – allowing McLaren to reduce the cost of mould tools and its carbon footprint.

With so many potential applications, the natural fibre composite racing seat is just the beginning. “This seat is the first step in the successful application of natural fibre composites in F1,” concludes Seidl. “By working with Bcomp we can identify other components that we can replace with a sustainable alternative that has equivalent weight and performance. There is no silver bullet in the race to be carbon neutral. Instead, we must continually evaluate every element of our cars and our operations to identify the ways we can improve performance, drive efficiency and reduce environmental impact.” 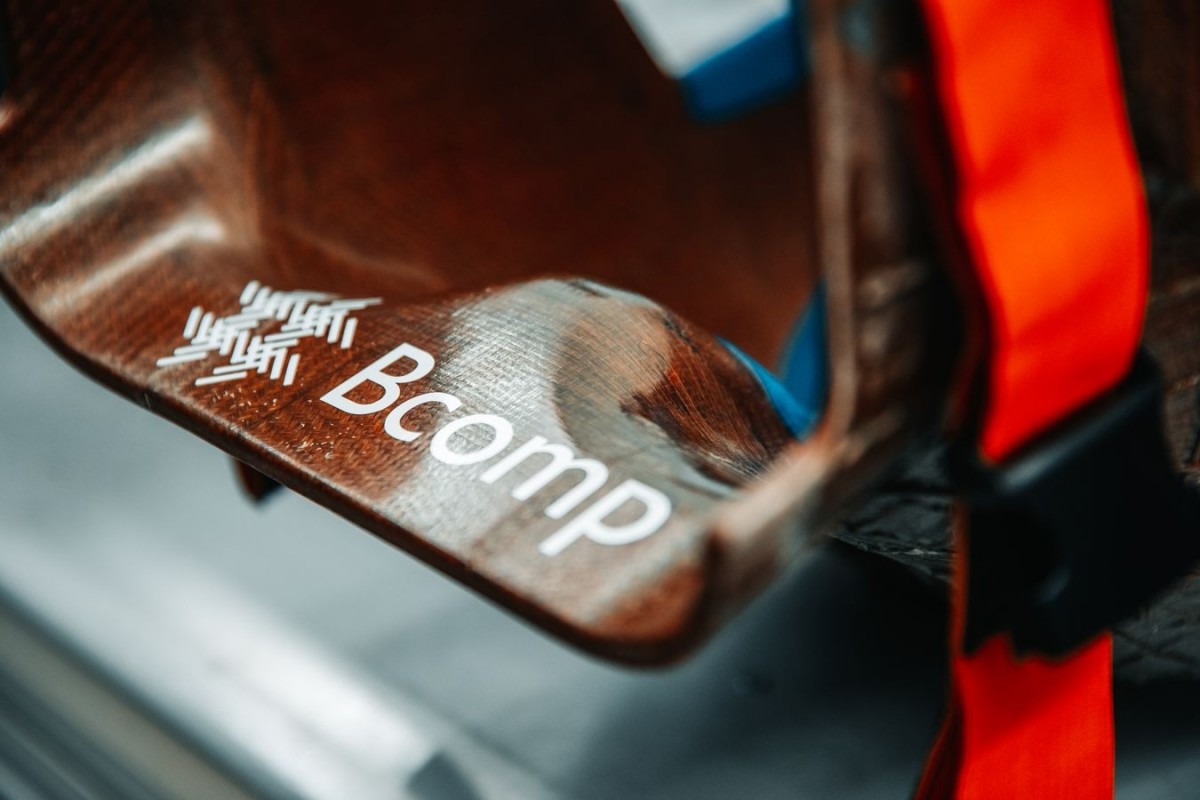