A shakedown test by Mazda factory sports car driver and USF2000 driver coach Joel Miller on 10 April followed by two days of development testing meant that more than 1,000 miles were put on the Tatuus PM-18, the new entry level model on the Mazda Road to Indy ladder. The new car will be available to teams as early in June. It will make its competition debut in the 2018 Pro Mazda Championship Presented by Cooper Tires.

It uses the same USF-17 as the base chassis to help control the operational costs for teams who wish to move up. It also has more Mazda power over the USF-17, more sophisticated aerodynamics, a two-element rear wing and a front wing with adjustable composite wing flaps. The PM-18 also adds a higher level Cosworth data system to help train the next level of drivers and engineers in the Mazda Road to Indy. Larger American Racing wheels with Cooper Tires add to the package.

“The car itself, with more horsepower and more downforce, is going to slot in well,” said Miller, who also conducted prototype development of the Tatuus USF-17 which debuted earlier this year for the Cooper Tires USF2000 Championship Powered by Mazda. “It is going to close the gap to the Indy Lights car which is needed. It is substantially faster in a straight line. Cornering speeds are hard to estimate because the track was so green but we are already at qualifying pace with the car. Driving wise, it is quite a bit faster than the USF-17 and it has more mechanical grip. With the extra horsepower in this engine, you have to be cognisant of tyre degradation in the rear which is good. All the kids will need to learn this. Everything the drivers learn in USF2000 can be applied to this car and they will learn more here before they move on to Indy Lights. It will be an excellent stepping stone.

“At Mid-Ohio, we focused on the chassis and tyres. This car has more aero pieces so we wanted to try a few things and we went through that list. It responded very well, so that is very encouraging. On the tyres, we tested an array of different compounds. It was kind of a blessing in disguise because Thursday was very, very cold and Friday was warmer so we were able to see two completely different conditions which really made it well-rounded. We’ll continue this at the next test.”

As a means of containing costs for competing teams and drivers, the Tatuus USF-17 also serves as the base car for the PM-18. Enhancements over the USF-17 include more sophisticated aerodynamics with an adjustable dual-element rear wing and single-plane carbon fibre front wing with adjustable flaps and Pro Mazda-specific front and rear endplates.

As with the USF-17, development of the PM-18 has been overseen by project manager Scot Elkins in conjunction with chassis designer and manufacturer Tatuus.

“We are close to having 1,000 miles on the car in just these three days,” said Elkins, who also serves as race director for USF2000. “It has pretty much been trouble-free running. We were able to make all of the adjustments we needed, and the biggest thing is the new engine because the majority of the car is the same as the USF-17. Everything we have been doing in regards to the engine has been going very, very well. We had to do some adjustments for the shifting and some of the other systems to make it adjust for the extra 100 horsepower. Overall, it has been really great. Joel has done a good job as always. The Tatuus guys are incredible to work with and it is an absolute joy to do this project for Andersen Promotions.” 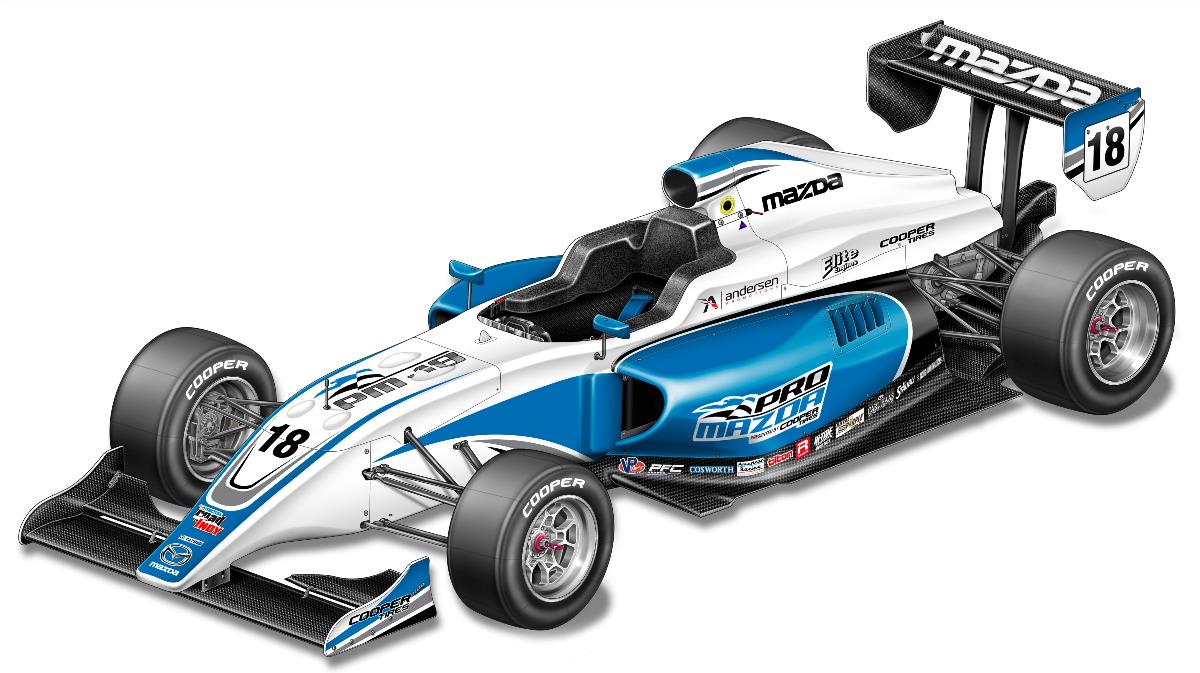 The PM-18 rolling chassis is priced at $61,800 and will be the series’ standard for at least the next five years. It replaces the Elan Pro Mazda chassis which was introduced in 2004 and provided the basis for a long list of talented young drivers to develop their skills, including Marco Andretti, Conor Daly, James Hinchcliffe, Spencer Pigot and Graham Rahal.

The first shipment of cars will be available to teams in early July. The debut of the PM-18 next season will complete a revitalisation of the entire Mazda Road to Indy Presented by Cooper Tires ladder system by Andersen Promotions – which oversees and operates all three levels – following introduction of the USF-17 this year and the Dallara IL-15 in Indy Lights Presented by Cooper Tires in 2015. PM-18 prototype testing will continue with outings at Barber Motorsports Park and Iowa Speedway in May.

“With the first three days of prototype testing now complete, it’s clear that once again Tatuus and Elite Engines have hit another home run,” said Dan Andersen, owner and CEO of Andersen Promotions. “Taking the already successful USF-17 and adding more downforce, bigger wheels and tyres and 100 more hp plus a limited slip diff, my team headed by Scot Elkins has created an awesome race car that will break Pro Mazda track records right out of the box and be a delight to drive.

“Drivers on the Mazda Road to Indy will now progress correctly with a far better training vehicle than previously, and they’ll be much better prepared for Indy Lights and ultimately the Verizon IndyCar Series. That’s what we are all about, and the success of testing so far provides me with the assurance that the MRTI ladder is in great shape for many years to come.”