The logo will be used by the F1 in Schools programmes that run in 45 countries with a phased introduction around the world through 2018 and replaces the original logo that has been used for the last 13 years. The new look for F1 in Schools complements the recent launch of a new suite of official F1 in Schools equipment.

We are very proud to have the support of Formula 1 and with the new era of the sport under Liberty Media, it was appropriate to review our visual identity and to bring it into line with their new branding,” said Andrew Denford, Chairman and Founder of F1 in Schools. “We would like to thank Liberty Media for allowing us to incorporate the new F1 logo into the F1 in Schools logo.

“Our relationship is continually developing with Liberty Media, as we have seen with the grid and podium access granted to our World Champions in Sepang, Chase Carey’s attendance at our World Finals Awards and Formula 1’s online promotion of our activities. We look forward to building on this further and supporting Formula 1 through our programme in the coming months and years.”

We’re delighted to continue working so closely with F1 in Schools as we break down barriers and engage the next generation in STEM and the opportunities within Formula 1,” said Ellie Norman, Director of Marketing & Communications, Formula 1. “With the rebranding of Formula 1 and its new identity it was only fitting to extend it into this education programme that is reaching a global youth audience.”

The competition challenges students to create their own Formula 1 team which is commissioned to design and manufacture a miniature Formula 1 Car starting with an F1 in Schools model block and a CAD software programme, with the car being powered by a compressed air cylinder. Each team of between three and six students creates a pit display and showcases their work in developing their race car. The cars race on a 20-metre track, with the cars covering the distance in around one second.  The students compete at regional, national and international level, with the national winners having the potential bonus of travelling internationally. The World Finals have been held in a variety of countries including Australia, Malaysia, Singapore, Abu Dhabi and the USA where the events are held in conjunction with the F1 Grand Prix being held in that country. The World Finals brings together the best students to compete for the coveted World Champions trophy and valuable university scholarships and bursaries.

Just recently, Unity, a team of 16 and 17 year-old students from Emmanuel College, Gateshead, celebrated winning the F1 in Schools UK National Finals 2018 that was held at Silverstone circuit. It brought together the top 42 teams from around the UK, who had won through from 10 Regional Final events held earlier this year. Unity’s success wins them a place at the F1 in Schools World Finals 2018 in Singapore in September, alongside the Singapore Grand Prix.

“I’m blown away by the standard we’ve seen this year,” said Denford. “The students have put in an amazing amount of work, displaying an exceptional level of engineering, design, and business skills and being excellent ambassadors for their schools and for STEM learning. I’m delighted to see Unity finally take the crown, they’ve shown such perseverance and have never given up on their dream of representing the UK at the World Finals.

“The skills developed by the students is almost unnoticed as their passion and motivation to design the best car possible takes over. It is only at the conclusion of this event when they reflect on their work that they realise how far they have come and their skills have developed whether that is confidence, CAD/CAM expertise, leadership, time management, or engineering. I’m very proud of every student, team and teacher involved in the programme, they demonstrate just how STEM in action can be invaluable in education.”

F1 in Schools is a not-for-profit company established with committed partners to provide an exciting yet challenging educational experience through the popularity of Formula 1. Spanning age ranges of 9 to 19, its main objective is to help change perceptions of Science, Technology, Engineering and Maths (STEM) by creating a fun and exciting learning environment for young people to develop an informed view about careers in engineering, mathematics, science, Formula 1, marketing and technology. 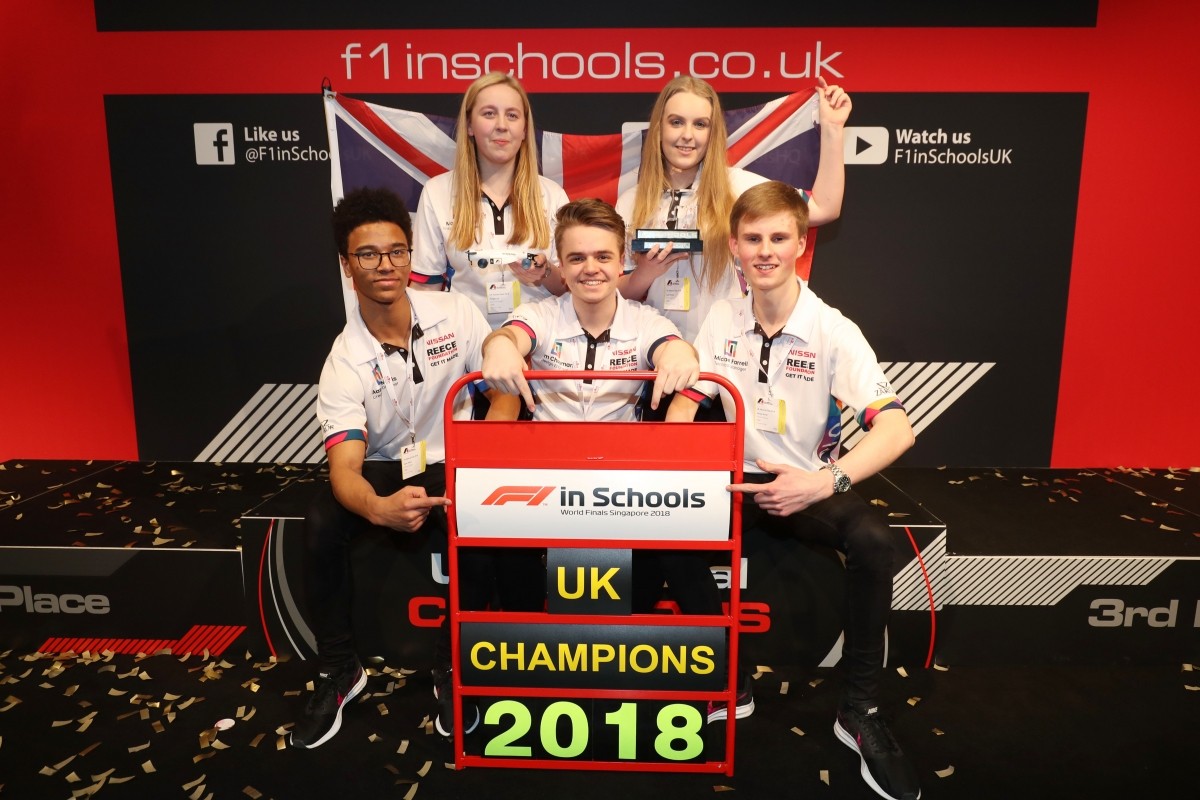 Unity, a team of 16 and 17 year-old students from Emmanuel College, Gateshead, celebrate winning the F1 in Schools UK National Finals 2018