Nothing on the Bloodhound LSR is normal – and the design brief for the disc brakes is no exception.

Its primary high-speed braking systems are the air brakes and parachutes, the disc brakes only used at the very end of each high-speed run to stop the vehicle as the heat energy created above 200 mph (320 km/h) is too high. Indeed, one of the reasons driver Andy Green has a speedometer in the car is to ensure he doesn’t apply them too early. However, while he won’t use them above 200 mph, they still need to be capable of coping with the maximum vehicle speed, meaning they have to withstand spinning up to around 10,500 rpm.

During the Newquay test runs in 2017, the car was fitted with carbon/carbon brakes on all four wheels. This was because the car only had a relatively short distance in which to achieve full engine reheat and then stop. The demand on the disc brakes in the desert is actually much lower, which means they have already had their hardest test – and passed!

AP Racing, which designed and supplied the brakes, is now looking at the design requirements for the high-speed test and record runs. The criteria are very different. For a start, rear brakes will not be used. Also, initial calculations, plus previous testing carried out on carbon discs, suggest that the wheels will exceed the maximum spin speed for the carbon material, so this means using steel discs.

As rear brakes are no longer needed, this allows for two spare carbon discs that can be tested as part of AP Racing’s engineering review to discover the maximum spin speed they can withstand and their breaking point. Previous tests were carried out using F16 and Typhoon brake discs. These were solid whereas the carbon racing discs that were used at Newquay were vented.

In addition to the redesign of the discs and pads, AP Racing is also giving the callipers a full service. The braking system had to work extremely hard during the 10 high-speed runs at Newquay, slowing the 5-tonne vehicle from 200 mph to zero as quickly as possible. Before the car heads to the desert, they will be fully inspected, serviced and reconditioned or replaced as necessary. This involves removal of the front suspension as the rear half of the calliper is actually machined into the uprights to save space – but that’s okay as they were being taken off for other work anyway. 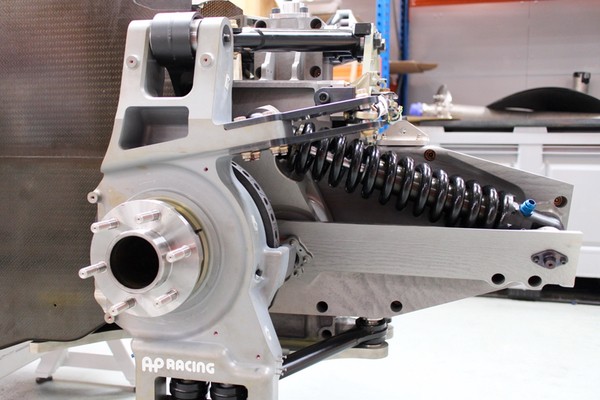