October tests aim to achieve speeds of 500 mph: potential to become one of the top 10 fastest cars of all time during testing phase

Bloodhound LSR, the most powerful straight-line car on the planet, has reached the exciting final phase of its build programme as it prepares to head to South Africa and be put through its paces in a series of high speed shakedowns on the vast Hakskeenpan desert, Northern Cape.

It will be the Bloodhound team’s ultimate test to date as the Bloodhound LSR car builds speed over 13 runs in steady 50 mph (80 km/h) increments between mid-October and mid-November, culminating in mind-blowing speeds of 500+ mph (800+ km/h).

That’s as fast as a commercial airliner’s cruising speed, but on solid ground, and would immediately place it amongst the 10 fastest cars of all time.

Powering this ground-breaking machine will be an EJ200 jet engine. Produced by Rolls‑Royce, the jet engine, normally found on the Eurofighter Typhoon fighter jet, creates a monstrous 9 tonnes of thrust (90 kN), equivalent to approximately 54,000 thrust horsepower. The jet engine will be aided by a monopropellant rocket system adding extra thrust when the Bloodhound LSR car attempts to break the land speed record in 12–18 months’ time.

“I’ve really enjoyed watching the team rise to the challenge over these past 6 months.,” said Bloodhound CEO Ian Warhurst.  “Something which has been talked about and planned for so long is now really happening – and the team have taken it in their stride. Our fantastic new location in the centre of a technical college at UTC Berkeley has really helped the project come alive – the project is now in new territory.

“It’s also very important to remember that the team in South Africa have also risen to the challenge. After so much work and several false starts, the Northern Cape Provincial Government didn’t hesitate to re-engage and have worked quickly and efficiently to help us finalise agreements and then mobilise the local workforce. This in return has brought much needed employment to the area to help us clear and prepare the track.

“So that’s it – we are off to South Africa to start putting the car through its paces. This is engineering at its best and I look forward to everyone joining us online as the action unfolds this autumn.” 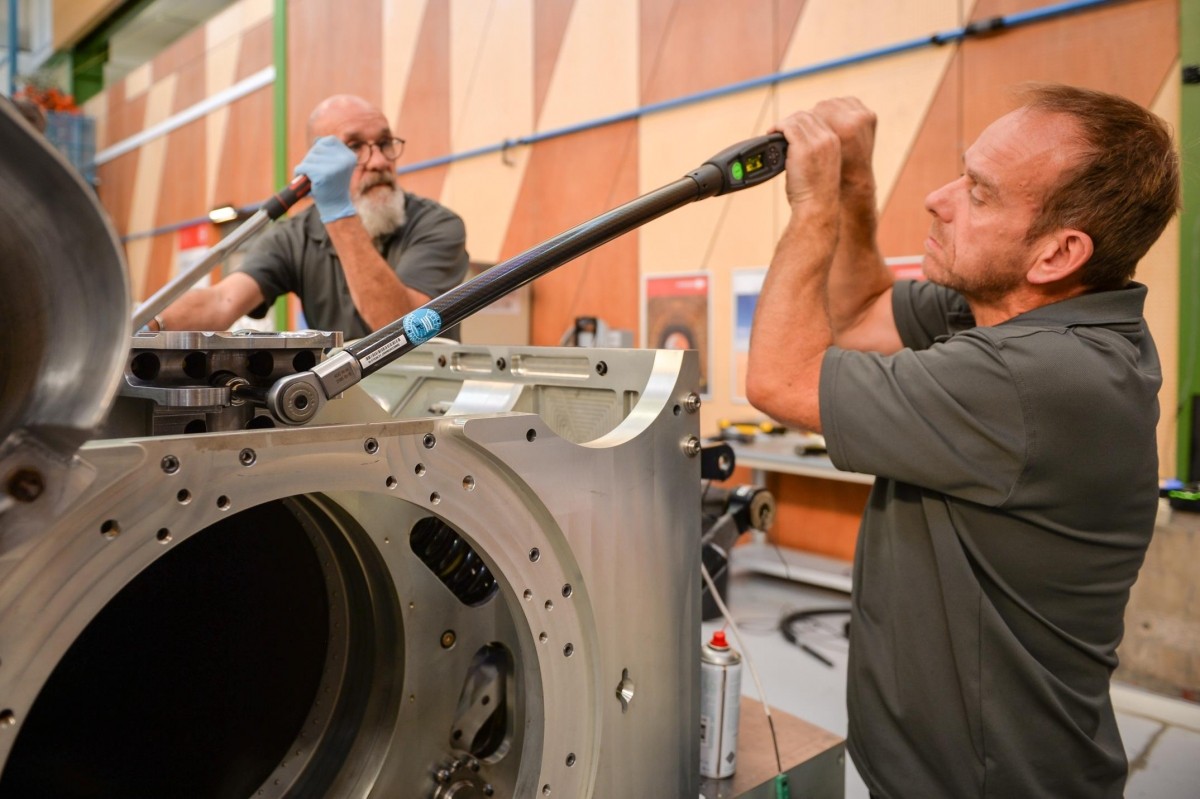 Final preparations: from 200 mph to transonic

Prior to departure, one of the final installation checks of the car’s state-of-the-art engine is to ‘dry crank’ it, checking all the systems are correct and working perfectly. This involves running through the start-up sequence and turning it over with no fuel or ignition.

A dry crank test is a crucial stage of the pre-testing programme as it confirms the engine and all its ancillary systems, fuel and electrics are correctly installed and ready to fire up once the car is in the full system test, confirming the engine can be started.

To perform the test the team will use an Air Start Cart (a small jet engine) to blow high-pressure air into the onboard Aircraft Mounted Accessories Drive (AMAD) gearbox, which will both spin the jet’s turbine up to required speed and, once spinning, generate 3-phase AC power for the car, which then sends power to the jet engine’s fuel pumps.

Bloodhound LSR engineering director Mark Chapman said: “Transforming Bloodhound from a runway spec car to one capable of reaching speeds in the transonic range on the desert racetrack has been no small task. The team of engineers, craftsmen, fabricators and technicians have pulled out all the stops to upgrade the car in just a few months since the rescue from administration last December.

“After many years in preparation, we can’t wait to get out to the Hakskeenpan and let Bloodhound off the leash to see just how it performs.”

Bloodhound’s departure: 5,500 miles (9,000 kilometres) on the clock for the world’s fastest car

Moving the 6.4 tonne Bloodhound LSR 5,500 miles (9,000 km) from the UK to South Africa throws up major logistical challenges in itself.

Much of the heavy support equipment, including the car’s trailer, has already set off to make the long journey by sea, but the car itself will travel via air freight to ensure it isn’t subjected to any uncontrolled shock loads that could damage it in transit.

The EJ200 jet engine will travel mounted inside the upper chassis, which is where you would find it in its natural home inside the Eurofighter Typhoon. The two-metre-high tail fin, which is the same size as that found on a Red Arrows display jet, has been removed and will travel upright in a wooden crate, along with some sections of the composite bodywork.

The car will be fitted with the wheels shod with pneumatic tyres that were used for UK runway testing at Cornwall Airport, Newquay, in October 2017, where they carried the car at speeds of up to 200 mph.

For testing in South Africa, the wheels will be changed from pneumatic to solid aluminium discs to cope with the high speeds and desert environment. The 90 kg desert wheels are produced by a consortium of partners including Castle Precision Engineering, which recently balanced the wheels to ensure they conform to Class G2.5, the same as aircraft turbine blades. This involves an exacting process of shaving microns of aluminium from the spinning discs to ensure they’re perfectly balanced and ready for the desert.

This stage of the testing process is crucial, as the 300-500 mph window is one of the most vulnerable stages for the car. It’s at this point that the stability of the car transitions from being governed by the interaction of the wheels with the desert surface to being controlled by the vehicle’s aerodynamics. The grip from the wheels will fade faster than the aerodynamic forces build up, so this is likely to be the point where the car is at its least stable.

The high-speed test programme will also be a full dress rehearsal for the record-breaking campaign, with the team using the time to develop their operational procedures, perfect their practices for desert working, and test radio communications.

Data on the interaction between the solid aluminium wheels, which are being used for the first time, coupled with ‘base drag’ measurements, will provide real world insight into the power required to set records. Base drag relates to the aerodynamic force produced by low pressure at the rear of the car, sucking it back. As the car approaches transonic speeds, this force far exceeds the friction of the air passing over Bloodhound’s bodywork.

Assistant aerospace engineering Professor Ben Evans, from Swansea University, and PhD student Jack Townsend will join the Bloodhound team in the desert to help analyse the gigabytes of performance data from each of the runs. They will be comparing the real data against the predicted Computational Fluid Dynamics (CFD) models to see how closely they marry up. A key aim of these tests is to provide valuable data allowing the refinement of the CFD models, which will in turn improve the accuracy of future modelling.

Bloodhound engineers will use the data to validate the next run profile, allowing safe increments in speed as the real vehicle data is compared with its ‘digital twin’.

During low speed trials in 2017, driver Andy Green, the current World Land Speed Record holder, drove the previously blue and orange liveried car from a standing start to 200 mph in 8 seconds on the 1.6 mile (2.7 km) runway at Cornwall Airport, Newquay. Now, with 10 miles (16 km) of perfectly flat Kalahari Desert, the Bloodhound LSR team will be able to push the car much harder and get an accurate picture of how it behaves at much higher speeds.

RACE TECH magazine @RaceTechmag
In the March issue out now we look at BUTTON vs HAMILTON: The off-road passion that led from Lydden Hill to taking… https://t.co/UGK7U7GnMb