Tributes have poured in from the motorsport industry following the death of former FIA President, Max Mosley, who died yesterday aged 81.

Formula One teams including McLaren, Ferrari and Williams Racing have sent tributes, alongside motorsports leading figures and businesses, following Mosley’s death yesterday after a long battle with cancer.

Mosley became the FIA President in 1993. Part of his major achievement as the President was the introduction of the European New Car Assessment Programme (Euro NCAP or Encap). He also promoted increased safety and the use of green technologies in motor racing.

In 1997 he led a successful campaign for the FIA to be recognised by the International Olympic Committee. A few years later, he launched Formula Zero, a strategy for reducing fatalities and injuries on track and road. The policy document identified the safety synergies between motorsport and motoring and outlined an approach to road safety involving a zero-tolerance approach to deaths or injuries.

In 2002, Mosley proposed the establishment of the FIA Foundation and the FIA Academy. Mosley served as a Trustee of the Foundation, a charity focusing on promoting road safety, environmental protection and motor sport safety worldwide. The FIA Academy was created to develop important projects to stimulate research and create the necessary framework to promote road safety and protect the environment.

In 2004, Mosley also proposed the establishment of the FIA Institute for Motor Sport Safety in order to develop and improve safety measures and sustainability across all areas of motor sport, from junior racing to top-level championships.

He was re-elected as FIA President three times – in 1997, 2001 and 2005 – each time unopposed. When he eventually decided to stand down in 2009, Mosley endorsed Jean Todt as his successor and like many before him, was named Honorary President of the FIA shortly after.

Mosley received many government and industry awards, most notably the ‘Chevalier de l’Ordre National de la Légion d’Honneur’ in 2006, in recognition of his great contribution to road safety and motor sport.

Deeply saddened by the passing of Max Mosley.He was a major figure in @F1 & motor sport. As @FIA President for 16 years, he strongly contributed to reinforcing safety on track & on the roads. The entire FIA community pays tribute to him. Our thoughts & prayers are with his family pic.twitter.com/iFcHzBHaWX

Formula One teams have also sent their condolences including Mercedes F1, McLaren, Ferrari and Williams Racing.

McLaren Racing sends its condolences and sympathies to the family and friends of former FIA president Max Mosley on the news of his passing.

His tenure was defined by the major safety advances in motorsport and global mobility that continue to this day. pic.twitter.com/hf6CVZA4Fb

We are saddened to learn of the passing of former FIA president, Max Mosley.

Our condolences go out to his family and friends at this difficult time. pic.twitter.com/IZXUIEmLyf

McLaren Racing sends its condolences and sympathies to the family and friends of former FIA president Max Mosley on the news of his passing.

His tenure was defined by the major safety advances in motorsport and global mobility that continue to this day. pic.twitter.com/hf6CVZA4Fb

In 2018 Mosley gave an exclusive interview with RACE TECH from Saving F1 from self harm to saving lives. Read it for FREE here. 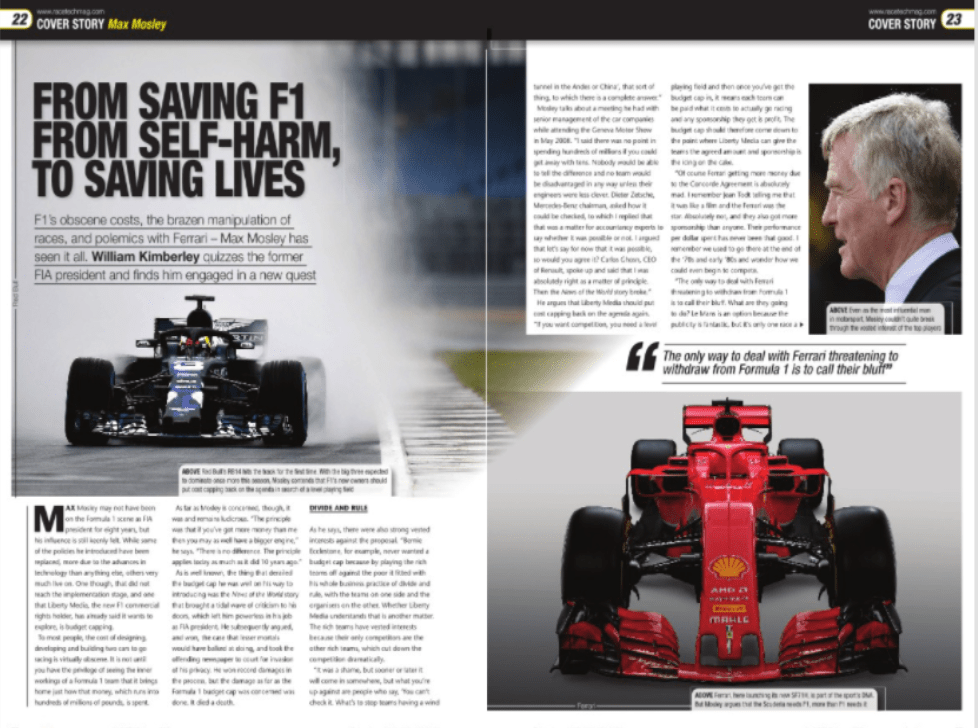