In celebration of a 50 year long illustrious career, Gordon Murray has revealed the lightest, purest and most aerodynamically advanced supercar in the world; the T.50.

This iconic work of engineering art shows what is possible when an F1 design approach is paired with delivering the ultimate driving experience. With UK companies, including MIA members, Xtrac, Sprint Power, SST technology, Lentus Composites, Martins Rubber Company and AP Racing, supplying every major component as well as manufacturing the powertrain, body and chassis, the T.50 is a true testament to British engineering.

Going against the modern trend of large, heavy supercars, Murray exploited his 20 years of F1 experience to minimise the weight of each individual component, focussing the T.50 on its weight-to-power ratio, rather than the conventional power-to-weight ratio. This philosophy has resulted in the T.50 boasting a weight of only 986kg, which is a third lighter than today’s average supercar.

‘Right from the start of the project, Gordon was very clear that the main target was to make everything as light as possible,’ highlights James Setter, Head of High Performance Automotive at Xtrac. ‘He also wanted to make the T.50 one of the last analogue supercars, hence the requirement for a six-speed H-pattern manual transmission. So, we utilised many of our motorsport techniques and skills, particularly around thin walled casings, to optimise the mass in every possible area.’ 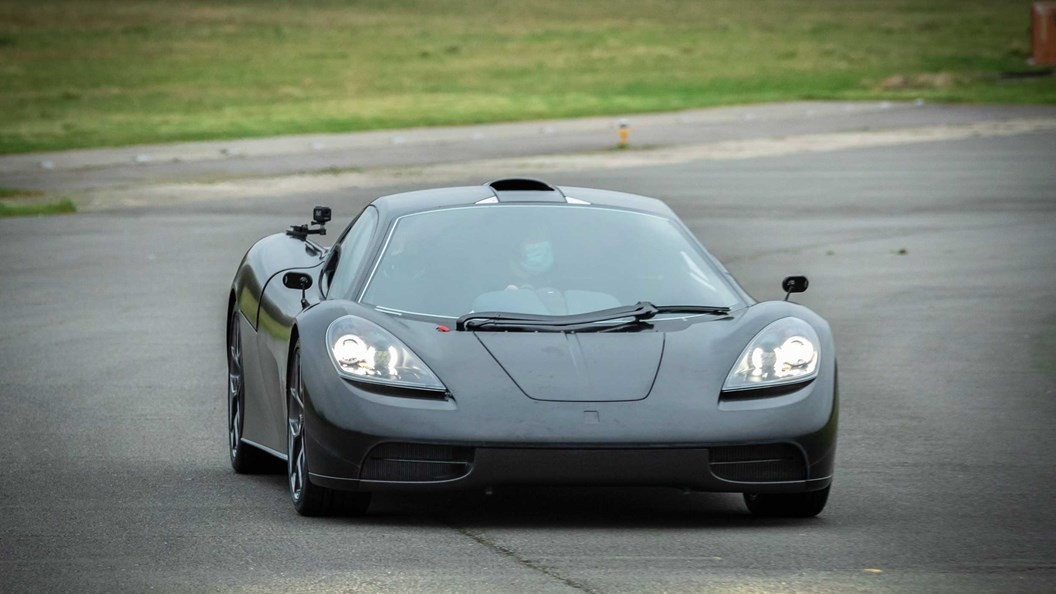 Another area of Murray’s racing expertise that is evident in the T.50’s design is packaging. At 4,352mm in length, this tightly packaged supercar achieves the same footprint as a Porsche Boxster yet can comfortably fit three people and 228 litres of stowage. Integrating all the complex powertrain, drivetrain and electronic systems within such a small space, whilst hitting Murray’s demanding performance and aesthetic targets was a major challenge. One that was only achieved through the close working relationship Gordon Murray Automotive has with its partners.

‘Gordon was keen for us to work not just with his team, but also directly with Cosworth too,’ says Setter. ‘This close collaboration really helped to drive a systems-based approach and by working together we could optimise the packaging around each issue; lowering the mass of the overall assembly further. The engine and transmission has really been designed simultaneously which is much more a racecar approach.’

In fact, the level of collaboration led to a race team atmosphere. ‘Essentially, we are treated like part of their company, it’s not like a conventional customer and supplier relationship, we are very much embedded within their team,’ highlights Richie Frost, CEO at Sprint Power who are responsible for the integration of the T.50’s entire electrical system. ‘This allows us to work closely with them, and actually work with the chassis team to influence the design to better suit the electrical system. Without this level of collaboration, I think the vehicle would be a lot heavier and the time frame of the project would be a lot longer.’

Another technical highlight of the T.50 is its innovative aerodynamics which may seem surprising considering the car has no rear wing. Instead, a 400mm rear-mounted fan, reminiscent of that raced on Murray’s Brabham BT46B F1 Fan Car, works together with active underbody aerodynamics and dynamic rear aerofoils to enhance aerodynamic performance. With six different modes, each dynamically tuning drag and downforce for different scenarios, the T.50 features the most advanced aerodynamic package ever seen on a road car.

‘Gordon Murray has been setting the gold standard in supercar design for decades and his engineering masterpieces have made him the founding member of today’s supercar movement,’ says Chris Aylett, CEO of the Motorsport Industry Association. ‘There couldn’t be a better company for MIA members to collaborate with and it’s fantastic to see so many involved in all aspects of the T.50 project. Both the supercar and hypercar industry is proving to be a valuable lifeline for the UK’s motorsport industry so projects like this are vital for the business growth of MIA members.’