Welcome to the dream factory

Alan Stoddart travels to the French town of Saint-Prouant, where SADEV’s renowned transmissions are created – and legends.

Look back through the history of any motorsport series and there are iconic cars that stand out. Whether they broke records, technologically moved a discipline forward and elevated its level of competition, or even just captured the imagination of the fans, any petrolhead can reel off a list of legends: Lancia’s agile Stratos on the world’s rally stages; McLaren’s MP4/4 dominating its F1 rivals; or Audi’s Le Mans legacy-building R10.

The keen motorsport fan, however, can go one step further and remember details about the Dino V6, the turbocharged Honda unit or the innovative diesel V12 that they raced with.

This is of course still only half the story, however, with even the mightiest engine in the world being no good unless its power can be efficiently and reliably transferred to where it is needed. SADEV is among the companies that excel in this, and supplies transmissions to major manufacturers in motorsport through to the more cost-conscious categories.

SADEV has been part of the motorsport industry for over 45 years, including 10 years developing high-performance electric components. Regardless of where the gearboxes end up, they are all made on the same production line in the French town of Saint-Prouant, by the same highly-skilled engineers and technicians. By creating all of the gearboxes side by side, whether it goes to one of the firm’s customers with the most incredibly taxing demands, or a customer that primarily wants affordability and reliability, they all meet exacting quality standards.

This emphasis on quality starts even before the material used to build the transmissions enters the factory. SADEV works closely with the foundry to ensure that the raw materials are of the right grade to be used in the firm’s gearboxes and differentials.

This material then makes its way through the various stages of manufacture: from the rough blanks being cut, to the more precise grinding of the teeth and splines; from the heat hardening of the steel to ensure it stands up to the punishment of gruelling seasons, to the super-polishing that reduces friction for smoothness and overall efficiency.

All the components are checked by the technicians after each stage of production. Based on the complexity of the operation and the technicity of the part, it will be a more or less in-depth inspection. A good example is the inspection that takes place during the heat treatment. After cleaning all the impurity on materials in the Ultrasonic cleaning unit, the technician – equipped with white cotton gloves – will, with the meticulous nature of a surgeon, examine all the parts before they go into the heat treatment process in the horizontal oil and gas quenching vacuum CNC machine (BMI Vacuum furnace). Following this operation, a metallurgical engineer will analyse and measure the heat treatment structure in the laboratory with sophisticated tools (microscope, spectrometer, etc). Once checked, the data is archived in the system and the manufacturing process can carry on.

This level of quality control is maintained until all the individual components are completed, and then there is a final QA step that sees parts scrutinised once again before assembly.

Sophisticated coordinate measuring machines check the finished parts to make sure that they perfectly adhere to the dimensions laid out in the CAD drawings on which they are based. What’s more, after the completion of the entire process, every piece has a part number laser etched onto its surface, to give traceability to every component. By doing this, if there should be a problem, then it is easy for SADEV’s engineers to identify its cause, wherever it occurred, and take any steps necessary to rectify it he benefits of this closely scrutinised process are plain to see, with SADEV being a part of numerous winning packages across a very diverse range of disciplines. The firm’s success ranges from four world titles in Formula E, where efficiency is king, to the eight Dakar rally victories which pushed durability to the limits, to the four titles apiece in the World Rally Championship and World Rallycross Championship, where incredible toughness is required.

The company plans, however, to add to this tally in the coming years, helped, in part, by its latest releases.

One of the most exciting new products SADEV is releasing for 2020 is its new ST75LW transverse transmission for front-wheel drive cars. The original version of the gearbox was a very popular unit and saw lots of on-track action in series such as the Clio Cup thanks to its affordability and reliability. With advances in technology, and new machines and software at SADEV’s disposal, the company decided to combine all its latest technology and create a brand new ST75.

The new gearbox already has interest, with rally team M-Sport choosing the new package for its R2 entrant, where the gearbox has specific modifications on the casing to be able to be mounted more easily. Other than that, however, it is a standard unit with a wide range of ratios that is available to everyone.

There are several things that make the new gearbox special. Firstly, it is smaller and lighter than the previous model. Shedding weight is always a bonus in motorsport, if, as has been done in the case of the ST75LW, it has been achieved cautiously without sacrificing strength or reliability.

Reducing the size of the gearbox is also an important factor, with the new smaller size giving more options in terms of packaging to the teams and the manufacturers who want to run the transmission. Of equal importance is that it fits in with wider industry trends for downsizing.

Although this industry direction is usually just discussed in terms of engine size, these changes have actually had a knock-on effect on the amount of room under the bonnet, making the smaller size of the ST75LW a bonus for racecar builders.

Another of SADEV’s new products is building on its presence in the North American market. The company has been providing race-winning transmissions for a while into some of the high-end series like Global Rallycross and Ken Block’s Monster racers. But where it has provided transmissions for European junior series, there hasn’t, until now, been an option that is perfect for the entry-level American categories.

This is largely down to the different kinds of cars used by American drivers in the junior categories. Whereas in Europe, people might opt for something like a Mk2 Escort or a 205 GTi, in America, this default choice is something like a Mustang, with a relatively high-capacity V8. The gearbox mated to this engine will obviously have much different requirements to the one driven by the smaller, less torquey engines of the European counterparts.

This is the role the new SCL 924 plays. SADEV meets the market needs with this new in-line gearbox because it can be easily integrated into the transmission tunnels due to its small size and reduced distance between the primary shaft and the bottom of the gearbox.

The new gearbox is bespoke, being designed specifically for the market. This means the sequential box comes in at a lightweight 38 kg (83 lbs), while including important features given the end use cases, such as an internal torsion bar, and a central bearing carrier to ensure that there is no deflection of the shaft given the expected power and torque running through it. 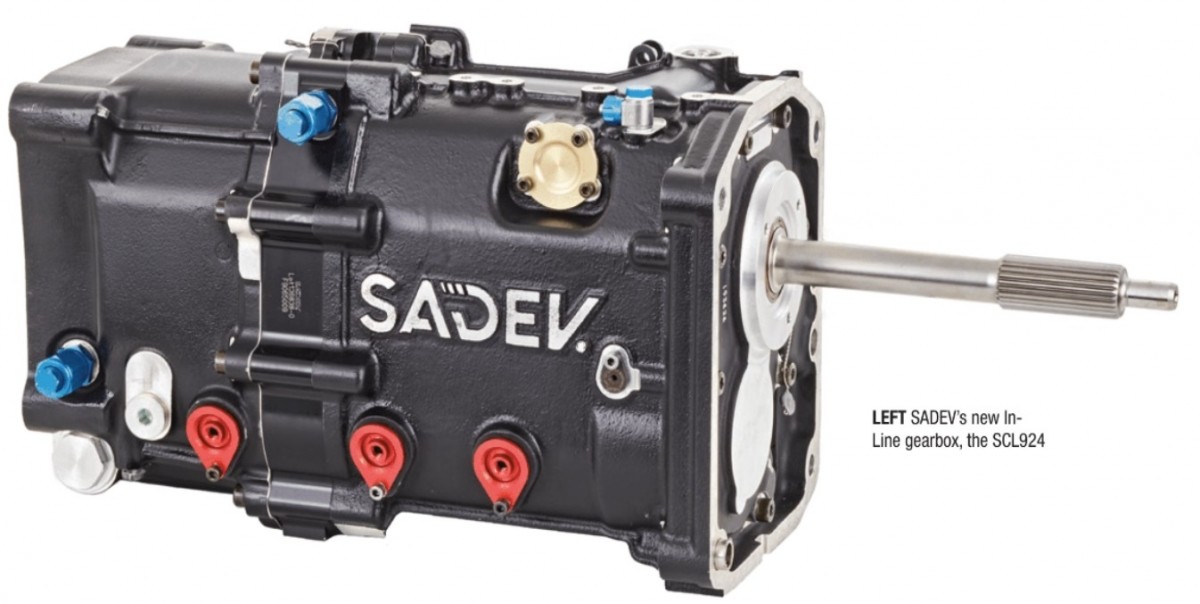 As with the other new products, the SCL 924 is also keenly priced against the alternatives. It offers a technologically advanced package at a level which makes it a great fit for the likes of GT3 and GT4 teams, as well as custom shops which build classic Mustangs and Camaros and the like with modern underpinnings.

Another category that is also receiving a new product is Touring Cars, with the ST90-17. The new unit fits in SADEV’s range of transverse boxes. The company realised that there was a need in the market for a gearbox that came in at the same price as SADEV’s other options like the ST82-17, but with more capacity and greater overall strength. Despite this increase in capability, the gearbox only weighs slightly more than the previous model.

This was achieved thanks to improvements at the design stage, with both experience from previous gearboxes and new software tools meaning that designs can be less conservative without risking an impact on reliability or durability.

As well as being stronger, the ST90-17 also complements the direction that touring car competition is heading in. With series like WTCR, it was key to have a new product with a bigger centreline as well as other more complex improvements, such as development of the differential to improve its efficiency in getting power to the wheels.

These new offerings, as well as others that SADEV has in store for the coming year, will also benefit from the company’s comprehensive aftersales service. This includes both the servicing and rebuild of the gearboxes, as well as SADEV’s 1,600m 2 parts warehouse, whose 13 dedicated staff members are able to ship replacement parts anywhere in the world within 48 hours.

Motorsport fans are renowned for their knowledge, but rarely get to glimpse behind the scenes. If they were to witness the expertise and effort going into the transmissions coming out of Saint-Prouant, and the impressive technologies that are used in the manufacture of SADEV’s gearboxes and differentials, they couldn’t fail to be impressed.

Indeed, the consideration given to the way products will be used in the real world, and the levels of quality control and holistic care that are devoted to every stage of production, mean that the transmissions are bound to be appreciated and trusted by drivers and mechanics across the world in different series.

Even if the gearboxes themselves don’t get to become legends, you can bet that some of the iconic cars they power will be one day!

This article first appeared in the February 2020 issue of RACE TECH magazine. Get the full issue here.