Formula 1 has released a draft calendar of the 2020 FIA Formula 1 World Championship that will include 22 Grand Prix for the first time ever.

The calendar has been submitted for approval during the FIA World Motor Sport Council meeting on 4th October.

It will be the first time For  the  first  time  ever,  the Formula  1  calendar  will  comprise  22  Grands  Prix.  Ten  events  will  be  held  in Europe, seven in Asia, four in the Americas and one in Australia. As already announced, Melbourne gets the seventieth season underway on 15th March and, as usual, it will end on 29th November with the Abu Dhabi Grand Prix at the Yas Marina circuit.

Vietnam will make its debut as a host nation becoming the 34th country to stage a round of the FIA Formula 1 World Championship, with a race in the capital Hanoi on 5th April.

A famous name from the past returns in the shape of the Zandvoort circuit, which will be the venue for the Dutch Grand Prix on 3rd May. Australia, Great Britain and Spain have renewed their contracts, as has the more recent and spectacular Azerbaijan Grand Prix. Mexico City will continue to host a race for the next three years under the new title of Mexico City Grand Prix. And, currently being finalised is an extension to the contract with the Italian Grand Prix, which next weekend celebrates its ninetieth anniversary.

Chase Carey, Chairman and CEO, Formula 1, said: “The season with a record 22 Grands Prix has received unanimous support from the FIA and all the teams and clearly demonstrates the confidence that exists in the future of our sport, which with over 500 million fans remains one of the most followed and popular in the world.” 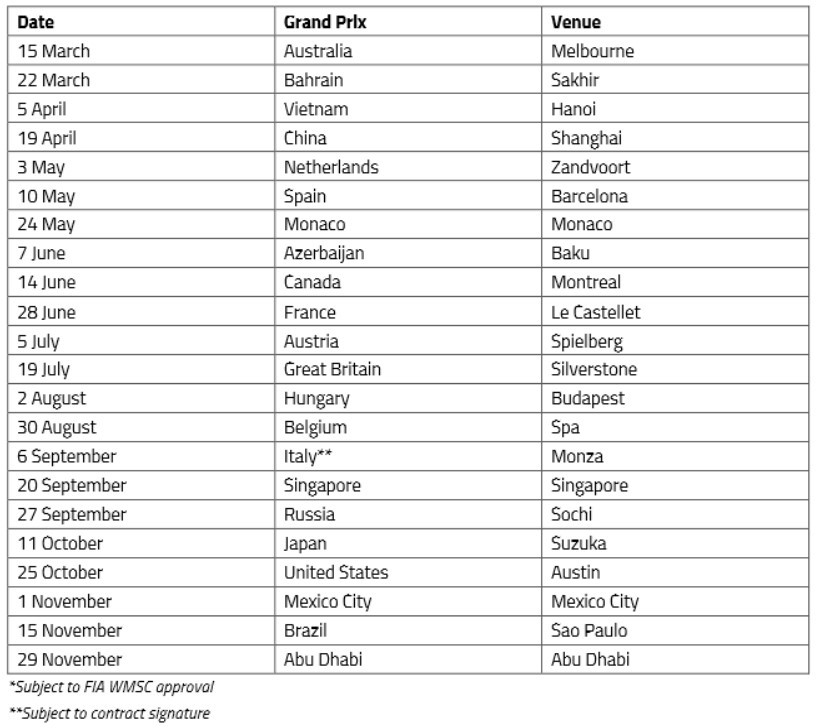