Ariel Motor Company is to showcase its AERO-P Atom at the Low Carbon Vehicle Show 2016 at Millbrook Proving Ground, Bedfordshire, on Wednesday 14 September.

Standing for Aerodynamic Efficiency Requirements and Optimisation Project, the vehicle is part of an ongoing collaboration between Ariel, TotalSim and Delta Motor Sport, investigating aerodynamics on current production and future technology vehicles.

Using both passive and active aerodynamic solutions the project also looks at cooling and airflow management requirements on electric and hybrid vehicles, as well as conventional ICE cars, in order to maximise vehicle efficiency and performance.

Although much of the project is still in development and remains confidential, an interesting demonstrable output already is the Atom test car giving downforce at any speed, including standstill.

Simon Saunders, director at Ariel, said: “Although it’s a large and complex project, covering a lot of areas, performance is core to us. We’re moving towards the point where traction and therefore acceleration, particularly from standstill, are limited by mechanical grip so were trying to come up with ways of overcoming this. One of our targets was to minimise or remove the need for aerofoils and have ‘downforce when stationary’.

“Inspiration came from banned racing cars of the past, so there’s a big nod from us to Jim Hall’s 1970 Chaparral 2J Sucker Car and the Gordon Murray Brabham BT46B Fan Car of 1978. The Atom test car has been already been nicknamed The Vacuum Cleaner and hopefully it follows in the tradition of these two great cars.”

Conventional aerofoils and aerodynamic devices give downforce at speed – the higher the speed, the higher the downforce.  However, the negative aspect of this is that downforce is not required for most of the time, particularly for road based cars during normal driving, and is not available at slow speed or when stationary. The ensuing drag of fixed aerofoils not only reduces a vehicle’s top speed but has a marked negative effect on its fuel consumption as well as emissions. On the Atom, drag can be increased by as much as 15 per cent by adding conventional aerofoils with the resultant effect on fuel use and tailpipe emissions.

On the AERO-P Atom there are no aerofoils, therefore drag is not increased, adding to the efficiency of the car as well as top speed. The downforce generated by the system not only improves cornering ability but also braking for track use and in emergencies, increasing performance while improving stability and safety. 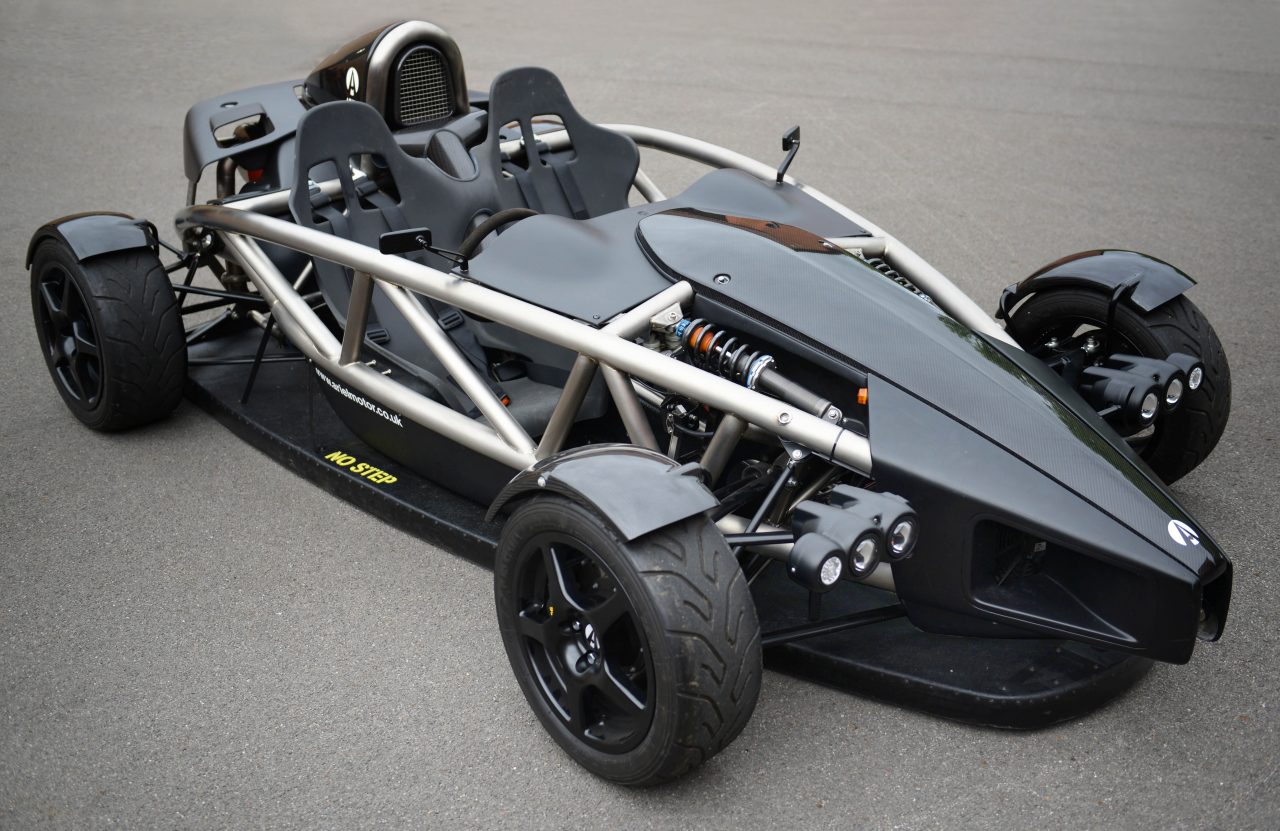 Powered by two small, lightweight, high-speed fans, the Atom test car has an additional moulding and rubber skirts added to the bottom of the tub as well as ducting and a standalone battery pack. The ability to spin up the fans very quickly allows the system to be turned on and off when required, whether under acceleration, cornering or braking, either manually or automatically. Fans are, therefore, only running when there is a need and for brief amounts of time, for instance from start, when cornering or under braking. When not required at cruise and high speed conditions the system remains in stand-by, improving vehicle range and reducing CO2 emissions.

The Atom AERO-P demonstrator is just an initial mule test bed and doesn’t represent the production possibilities of the system, which will be the result of further testing and development. The scope of the project also takes in wider passive aerodynamic design and the particular requirements of new technology power trains, not yet released and still under development.

“When the system is turned on the car visibly squats on the ground so you can see it working, which is pretty exciting,” added Saunders. “We’re already making about three times the downforce as aerofoils, but this really is just the first step and a very early stage in what is a large and complex project to bring to a production reality, so we have a lot more work to do.”

The aerodynamic development was carried out utilising CFD (Computational Fluid Dynamics) by TotalSim, based in Brackley. From their original roots in Formula 1 TotalSim are now world leaders in aerodynamics and fluid flow problem solving working on all types of motorsport and volume production vehicles.

Simulated performance times and bench testing of AERO-P prototypes at full size were carried out by Delta Motorsport, based at Silverstone. With a background in technology transfer from motorsport, Delta’s multi discipline skills have seen them rise to the forefront of UK engineering consultancy and advanced technology projects. Nick Carpenter, engineering director of Delta Motorsport added: “We love working with creative, lateral-thinking businesses such as Ariel and TotalSim, coming up with – and then implementing – novel solutions to tricky problems. As with many of the projects we’re working on today, we see the trickle down from high-performance vehicles to conventional passenger cars over time, so it’s great to be ahead of the curve with these new technologies.”