Electric GT Holdings Inc. and SPV Racing have unveiled the race-ready version of the EPCS V2.3 Tesla P100DL in Barcelona, ahead of the first season of its headline racing category, the Electric Production Car Series (EPCS). Itwas the first vehicle to be delivered to a team before the series debut in November.

Finished in SPV Racing’s testing livery, it completed a shakedown at the Circuit de Barcelona-Catalunya, with SPV Racing development drivers Emma Kimiläinen and Alvaro Fontes behind the wheel. The car was then officially unveiled to partners and media at a reception in the centre of Barcelona.

“This is a very significant day for the championship as we deliver the first race-ready EPCS car to SPV Racing,” said Mark Gemmell, CEO of Electric GT Holdings. “Years of planning and hard work have gone into delivering this championship and today I’m proud to be presenting a real, thoroughbred, race-ready car that will challenge all comers and thrill fans around the world. This is exactly the calibre of race car that will allow us to showcase and to fully engage the potential of the electric future.”

In the inaugural season, all EPCS drivers in the series will compete in an identical specification race-prepared EPCS V2.3 Tesla P100DL. With 778 bhp (585 kW) and 995 Nm torque, the race car will be capable of achieving 0-100 kph in 2.1s and will be capable of speeds up to 250 kph. 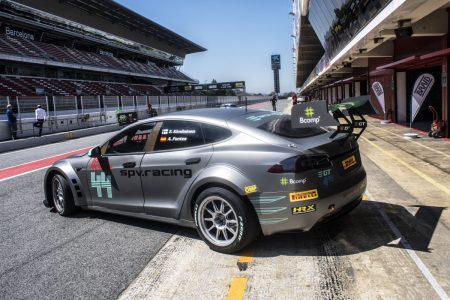 Gemmell also announced that the final round of the EPCS will take place at Vallelunga, Italy on 27-28 October 2019 following races in Spain, France, Germany, the Netherlands, the UK and Portugal as host countries for the 10-race first season.

The EPCS was introduced to celebrate the new age of all-electric transportation, to push the capabilities of electric road cars to the limits and drive forward a new age of electric innovation. Each race event will be a weekend-long festival of technology and innovation for sustainability, with racing at its heart.

The trio of race categories will also include the Electric GT eKarting Series and the Electric GT eSports Series, offering a gateway from virtual racing to the circuit. LVP (League of Videogame Professionals, by MEDIAPRO) was officially announced as promoter of the Electric GT eSports series. The virtual version of the EPCS V2.3 Tesla P100DL is now available for download from http://electricgt.co/ for the Assetto Corsa sim racing platform.