Aussie Supercars Ford Mustang: it came, it saw and now it has conquered

It is finally here. Admittedly after only one race on 2 March, the opening round of the Virgin Australia Supercars Championship, but it came, it saw and now it has conquered. Ford’s new Mustang Supercar claimed a commanding victory in its very first race driven by defending champion Scott McLaughlin.

The Shell V-Power Racing driver gave the incoming model the best possible introduction, leading from start to finish in the opening leg of the Superloop Adelaide 500. He crossed the line with a 12.9651-second advantage, as Red Bull Holden Racing Team pair Jamie Whincup and Shane van Gisbergen rounded out the podium.

Ford had withdrawn from the Australian series at the end of 2015 as it worked through the process of shutting down local manufacturing the following year. However, under a deal signed in March last year, the car manufacturer officially returned to the series, having given both its blessing and technological firepower to the Mustang’s development. It has replaced the FG X Falcon as Ford’s racing weapon in Australia; the Falcon nameplate saying goodbye to Supercars two years after local manufacturing ended.

The Mustang project, which becomes the first two-door car on the Supercars grid, pitted against the ZB Commodore that debuted in 2018 and Nissan’s Altima, now in its seventh year, was led by Ford Performance in Detroit utilising its in-house Computational Fluid Dynamics capabilities. It worked with DJR Team Penske, which took over from Tickford as Ford’s official homologation team for the Mustang and which has played a lead role in developing the new Mustang to adapt the body to the control Supercars chassis. Much of the focus has been on the car’s aerodynamic package that was set following runway testing between all three cars last December, measuring them for downforce and drag.

There are six Mustangs in the field, with two entries from DJR Team Penske and four from Tickford Racing, including 23Red Racing’s customer effort. While the two teams wanted to introduce the Mustang to Supercars for some time, they required Ford’s support to develop it for the category.

Starting in 1995, it was decided that the Australian V8 Supercar would be restricted to the Holden Commodore and the Ford Falcon, both Australian-built models. However, these were not the out-of-factory models as they were customised for racing, but according to very strict rules.

V8 Supercar racing is meant to be affordable, so that drivers and their sponsors do not have to spend millions of dollars on custom-designed state-of-the-art race cars. V8 Supercar racing also emphasises the drivers, not the cars that need to be as standardised as possible to keep the playing field level. It’s how the car is driven that counts, not how it’s built.

In 2003, Project Blueprint was introduced to V8 Supercar racing which lay down certain rules that were intended to keep the races as close as possible, so that the cars would have roughly the same racing capabilities. Some of the key restrictions imposed by Project Blueprint included:

Since the Project Blueprint era began in 2003, new Fords have had a strong record of winning the title on debut, with the BA (‘03), FG (’09) and FG X (2015) all achieving the feat. Recent Commodores – the VE (2007) and VF (2013) – also ticked that box, before the ZB came up short last year. It came out of the blocks firing, dominating the Adelaide season opener with Shane van Gisbergen amid a flurry of paddock chat about composite panels. However, crucial points were lost while Triple Eight struggled to get the car consistently in the right set-up window at subsequent events. 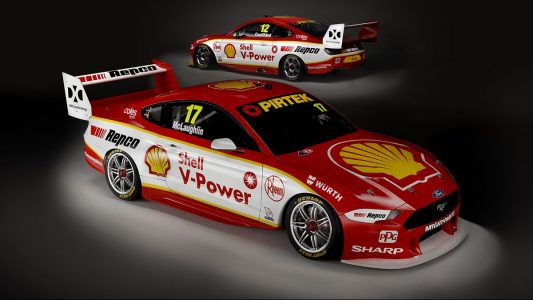