The Brabham BT62 set a new lap record at Bathurst in February, 2019

Aerodynamics – Understanding the record-breaking performance of the Brabham BT62

The Brabham name is synonymous with extreme high performance and advanced vehicle dynamics. Nowhere is this more evident than in the aerodynamics of the BT62. Designed to balance form with function – great looks, brilliant surface performance and incredible levels of downforce – the BT62’s aero treatment provides outstanding on-track performance.

The car is relatively lightweight and has a combination of elements – front splitter, end plates, turning vanes, flat underfloor, rear diffuser and rear wing – that work together to sculpt an efficient path through the air. The vortex rooster tail shown during a wet run of the test car at Donington Park, England, reveals the effect better than any wind tunnel could! 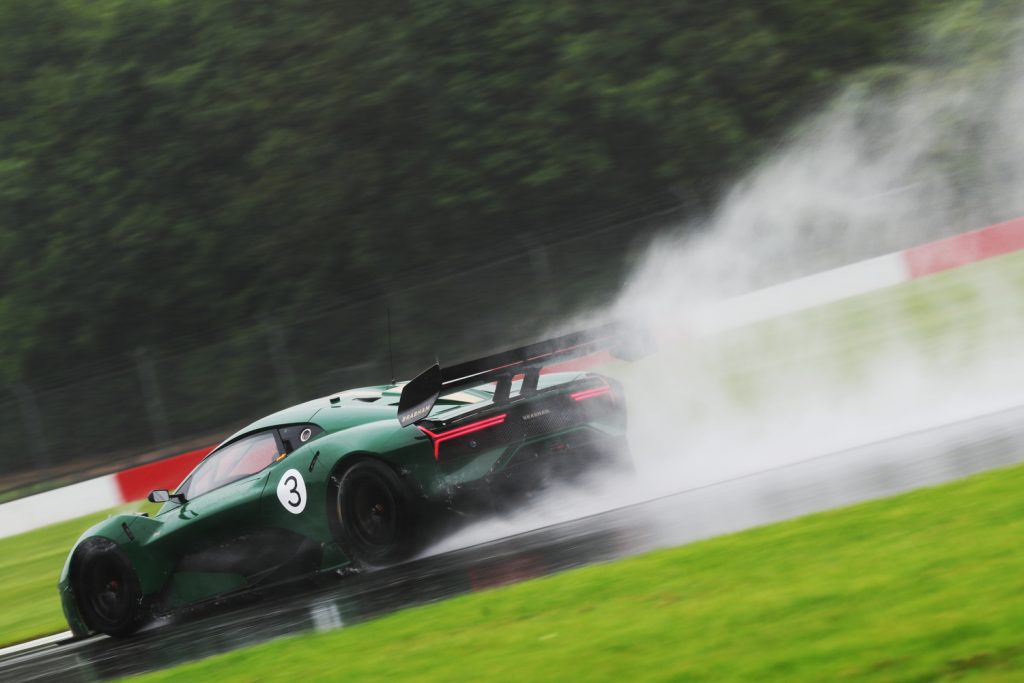 One of the keys to its performance is grip and aerodynamics. That comes from a two-headed, but singular, conundrum that every serious sports car faces – balancing downforce vs drag perfectly.

Downforce uses nature to help the car by directing airflow to push the car into the track, enabling far better grip and stability. Drag is the tendency for air to slow the car down. Vehicle aerodynamics is all about managing airflow to provide the downforce and cooling that you need while allowing minimal drag.

The Brabham BT62 has numerous design features aimed specifically towards these ends. 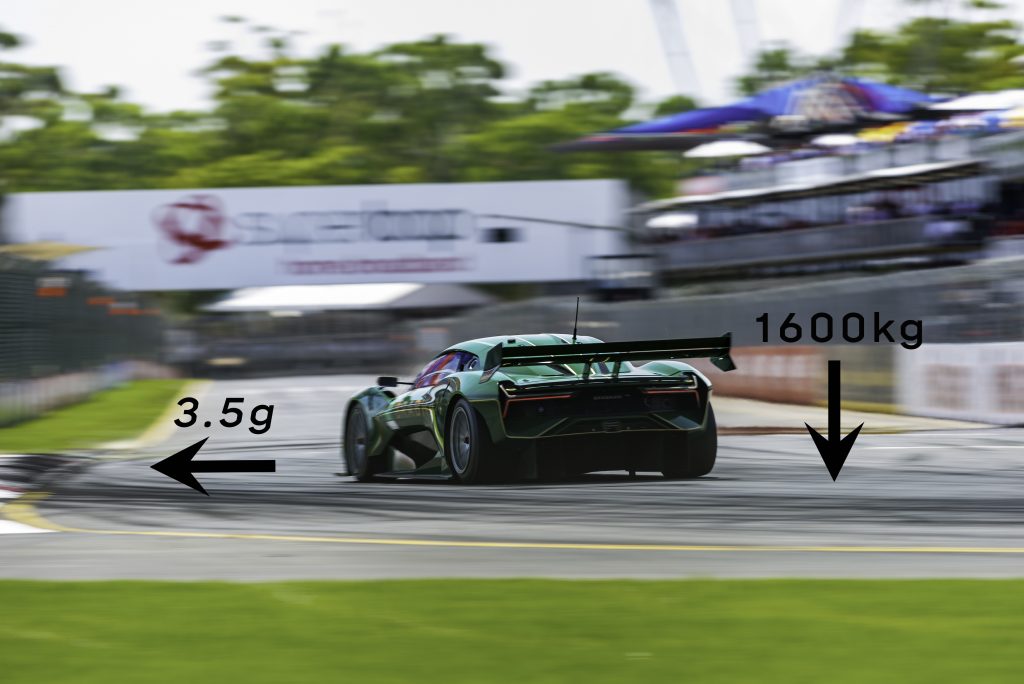 The development and refinement of these aerodynamic elements took place as the vehicle engineering matured and the vehicle testing intensified, during which time engineers transposed the styled form of the BT62 into the Computational Fluid Dynamics (CFD) model environment. The model’s sensitivity was then correlated with real world data in order to ensure that the model was giving verifiable data and an accurate understanding of the airflow over the car. 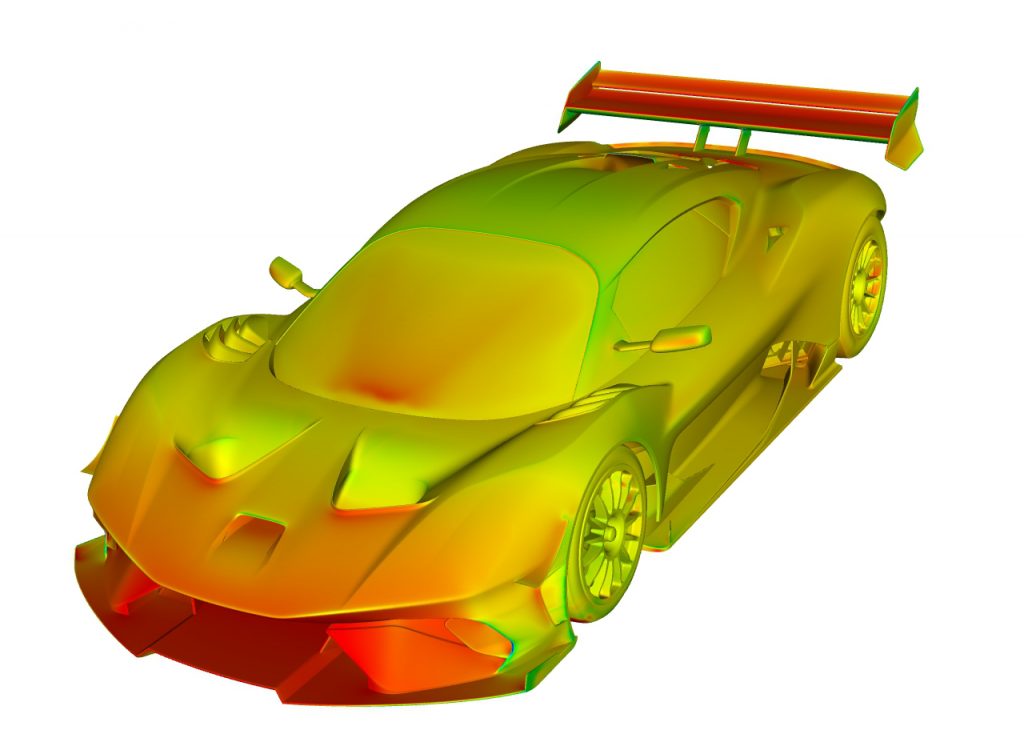 With the CFD model honed, new engineering elements were introduced and detail changes made one at a time, working front to rear, to quantify their combined impact on overall performance and cooling. Whilst elements are introduced one at a time, effects are measured as a whole. The primary aim was to ensure that every change resulted in all elements working in harmony with the airflow.

The result is a body design that shapes the air as approaches and then moves through it. Low pressure air is moved out and around the car while high pressure zones at the front and rear act to glue the car to the road and keep it stable at high speed and in the corners.

The illustrations below show how low-pressure air is streamed around the car as it passes through the air. The goal is to keep low-pressure air from the underfloor and rear wing while directing flow for cooling where it’s needed, with highest pressure air being used to create downforce on the wings and body surfaces.

As air hits the splitter at the front, high-pressure air provides downforce for the front of the car. Air then washes through the radiator and vents through the front hood, where the vast majority is diverted around the sides of the car.

Lower down, the end plates on the front splitter generate low-pressure vortices that manage flow along the side of the car, instead of allowing it to flow underneath where it would impact the floor and rear diffuser. 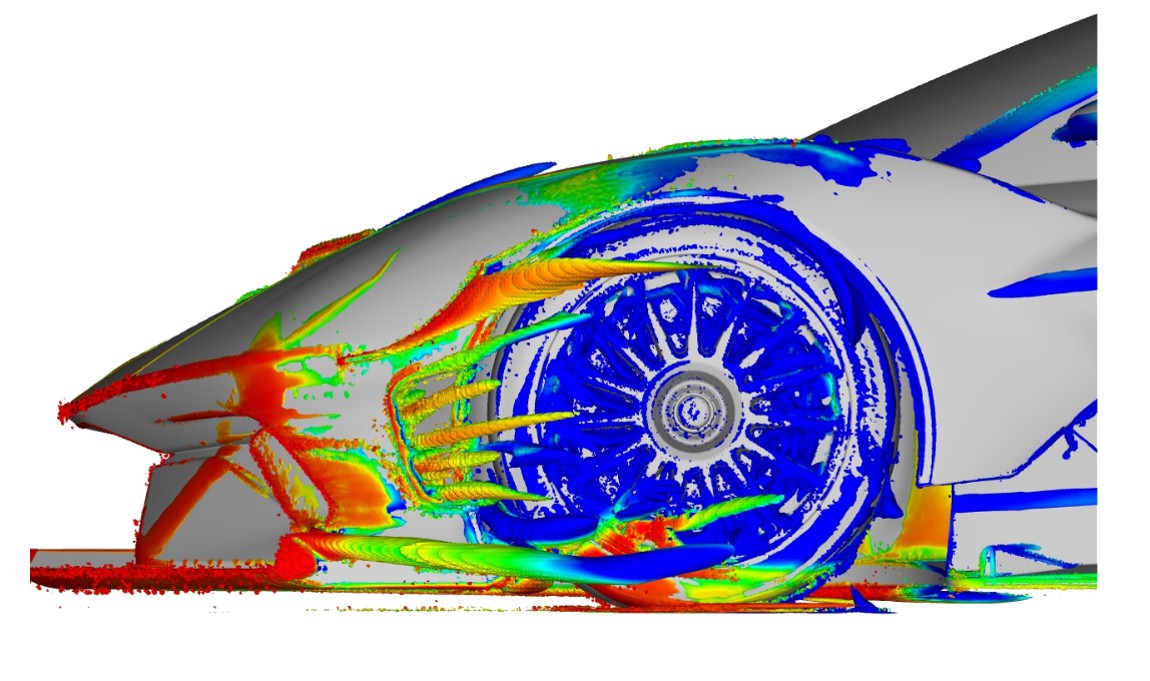 The underfloor of the car is completely flat, an important element in retaining low pressure. High air pressure on the under-surface of the car would cause lift. Maintaining low pressure underneath assists in maximising downforce and is critical for vehicle stability at higher speeds. The low-pressure underfloor area contributes to a centre of pressure that works with the car’s static centre of gravity, contributing to the BT62’s amazing dynamics and high-speed stability. 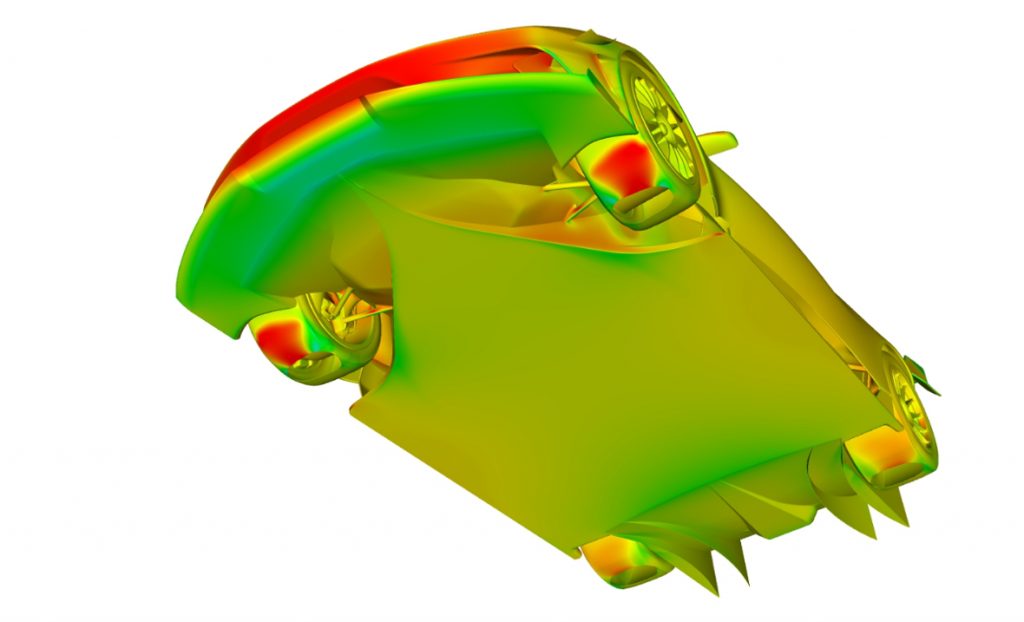 Detail of the airflow from the front outboard vent shows how vortex-generating surfaces help to manage the front wheel wake. Again, the goal is to evacuate air as efficiently as possible and direct it around the side of the vehicle and maintain low pressure on the underside.

The BT62 was designed as a high-speed track car and as such, its emphasis is on high downforce. The bulk of its downforce comes from the rear wing, seen in red, above. This wing has a lift to drag ratio of 5:1, meaning that for every Newton of drag force, it creates 5N of downforce. This focus on downforce enables the car’s amazing cornering speed while pulling up to 3.5G’s.

Of course, with so much downforce in play, there is mechanical pressure on vehicle parts as the car compresses under aerodynamic load. At 300 km/h, the aero load results in 8mm deflection at the front and around 18mm at the rear.

Deflection is sensitive to spring rates and addressed during the suspension setup but it highlights the importance of the BT62’s lightweight construction. The strength-to-weight ratio of materials like carbon-fibre makes the composite material an obvious choice for shedding load on critical parts while maintaining superior strength.

The result of all this is amazing grip and downforce figures that out-perform other high-performance competitors. As the table shows, that is despite having less overall power than most other rivals in its class.

While most supercars have maximum downforce around 600 kg at top speed, the BT62 has an incredible 1600 kg of useable downforce at 300 km/h.

In answer to the classic question about driving upside-down – Brabham Automotive estimates that with full fluids and driver on board, the BT62 generates enough downforce to drive upside-down at around 265 km/h.

“Aerodynamic stability is key for any driver to have confidence in their car on the track,” says David Brabham, sporting director, Brabham Automotive. “Whether it be under braking, while cornering, or exiting the corner, if the car is consistent and predictable then the driver can really explore their limits. The BT62 is one of the most stable and predictable cars I have ever driven.”