While taking more of a backseat in 2017 and 2018, IMSA has always backed Green initiatives, the Risi Ferrari Ferrari 488 GTE winning yet again the DEKRA Green Award for GTLM class teams in 2017

More than a decade ago, the IMSA-sanctioned American Le Mans Series (ALMS) pioneered a Green Racing programme in partnership with the Environmental Protection Agency (EPA), the Society of Automotive Engineers (SAE) International and the United States Department of Energy (DOE). At Detroit’s Belle Isle Park at the end of May, IMSA President Scott Atherton and EPA Transportation and Climate Division Director Karl Simon unveiled plans for expanded IMSA Green initiatives both on and off the race track which will come online over the next several seasons.

This programme will aggressively pursue Green Racing protocols established by these organisations along with its expansion of its own set of initiatives known as IMSA Green. This combination will considerably reduce the Championship’s carbon emissions and overall environmental footprint in an attainable fashion. The objective of these multi-year initiatives will be to keep IMSA’s racing relevant for manufacturers and marketing partners with an increased focus on proactive environmental responsibility. Collaboration with the EPA, SAE International, and official partners Michelin Tyres and VP Racing Fuels is fundamental to IMSA Green. Past association between IMSA and the US Department of Energy (DOE) has been critical to the development and implementation of this programme and their involvement is anticipated in the future.

“By taking a fresh look at the Green Racing protocols, and IMSA Green, we are taking steps to ensure sportscar racing continues to thrive in a rapidly changing mobility landscape which is focused on a reduced carbon emission future,” said IMSA President Scott Atherton. “In doing so, IMSA can showcase that racing can be used to develop and validate innovations while remaining exciting and sustainable for decades to come and be attractive to automotive partners, participants, sponsors and most importantly fans.”

IMSA maintained its Green Challenge Championship status from 2008 to 2016, the cars achieving Green Racing Challenge status through protocols established by the EPA, DOE, SAE International and IMSA. It was subsequently reduced at that time to the Green Racing Series level when the GTLM class moved to the global specification E20.

The goal for the next generation is to achieve Green Racing Cup status, the highest level of environmentally responsible racing through implementing innovative engine and fuel technologies.

“We were able to achieve the Green Challenge status,” said Atherton, “and had an eight-year run starting with the American Le Mans Series and continuing through into the WeatherTech Championship before the fuel regulations changed in 2016 when we moved to the more global formula, the fuel mix that is used at Le Mans and the WEC, the E20 that we have today.” 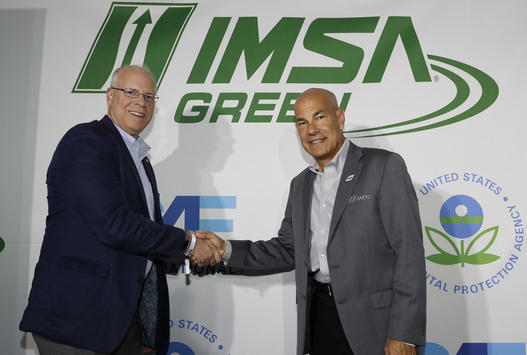 IMSA has continued to focus on identifying ways to return to the Green Challenge level and believes it can with the 2022 debut of its next generation Daytona Prototype international (DPi). This race car could lead to IMSA becoming the first racing series to attain Green Racing Cup status, the highest level of environmentally responsible racing through implementing innovative engine and fuel technologies. This status is defined within the SAE J2880, the Green Racing protocols, which was first published in 2008 and revised in 2014.

“If you’ve been following the reports, it’s not news, but for the record, we can confirm that the engines that will power that next-generation prototype will be hybrid power,” said Atherton. “IMSA is working with our current and interested OEM partners along with input and insight from the EPA and the DOE to finalise those regulations.

“We believe that the introduction of the 2022 DPi will help us become the first racing series to achieve the Green Racing Cup status as defined by those Green Racing protocols.”

Atherton said that IMSA Green can be a proving ground for manufacturers to showcase advances in these areas through IMSA’s seven sanctioned championships. Its own initiatives include tyre usage reductions and the development of alternate-blend fuels. An IMSA statement said that future programmes will go beyond race cars and envelop an entire event weekend providing the public with information on relevant, advanced technologies that produce clean and efficient production vehicles they might drive in the future. Its programmes will reflect and respond to challenges encountered by the automotive industry in the areas of improving energy efficiency, lowering its carbon footprint and reducing criteria emissions. Manufacturers can use these platforms in the development, demonstration and marketing of green technologies through motorsport competition including advanced propulsion systems, alternative fuels and reducing consumables.

Besides introducing a hybrid powertrain in its top racing class with DPi 2022, IMSA’s future plans could also include the adoption of ETCR (fully electric TCR platform) combined with an ePrototype platform.

“No tyre company has a more significant commitment to environmental responsibility, or a better grasp on what it takes to be involved in an actual reduction of tyre consumption,” said Atherton. “Working together with Michelin, we intend to reduce our tyre use with the goal of achieving a level of reduction that delivers and environmental benefit that would be equal to, if not greater than, the carbon footprint that occurs from our weekend on-track activities. That’s a lofty goal, but all involved believe that it’s possible.

“In future seasons, we will work together with our OEM partners, the EPA and the DOE, as well as our official fuel supplier, VP, with the goal of showcasing an advanced fuel that will feature a higher level of octane and most likely an increased amount of renewable content.”

Another key off-track IMSA Green initiative that was announced is IMSA’s participation as an affiliate of the EPA’s SmartWay program, which assists companies in using more efficient transport modes, equipment and operational strategies. These initiatives help reduce freight transportation-related emissions by accelerating the use of advanced fuel-saving technologies. As a SmartWay Affiliate, IMSA can play a key role in supporting these objectives by improving fuel efficiency, reducing emissions and saving money within its transport sector. IMSA will serve as a high-profile Affiliate, informing its partners about the benefits of the SmartWay Program and encouraging the use of its technologies and protocols.

“We’ve discussed from Day One with an enthusiastic partner in IMSA the goals of this programme and the work that we’re doing together,” said Simon. “There are three things that we think can come out of this programme. One would be reduced air pollution, not only from thinking about what the footprint of the race series is, but also thinking about the vehicles and how we get that technology that’s being proven every race into the marketplace. What matters to us is having people buy, use and operate those cleaner-technology vehicles.

“The second one is reducing fuel use and improving efficiency in the vehicles. That has a number of benefits, including a reduced carbon footprint and thinking about what that looks like and trying to provide information out in the marketplace. We think working with IMSA Green and our partners at DOE and SAE can really make inroads in terms of educating folks to make purchase decisions that will really help drive some of that beneficial behaviour.

“The last one and one that’s kind of new for us in this partnership that we’re excited about is the off-track. We’re really happy for IMSA to be a SmartWay affiliate for our programme. That’s a successful programme for us that has thousands of partners across the country that help work in really improving freight efficiency, the protocols that are associated with that, the reporting obligations, the best practices, all of those things IMSA can really help us improve.”

IMSA is also exploring the implementation of solar energy within the pits and paddock to help offset traditional energy sources. It will also look to showcase manufacturer hybrid and electric powered production cars for hot lap and pace car deployment at its events.

“Green Racing is a great platform to educate our stakeholders and fans about what IMSA’s environmental mission is all about and how it is directly tied to the priorities of nearly all of our 19 automotive partners,” said Atherton. “There are simple, reasonable practices we can implement immediately to get this programme making a difference along with more aggressive initiatives to be implemented in the future.”

“We are pleased to be working with IMSA to expand the series’ work on sustainability,” said Chris Grundler, Director of EPA’s Office of Transportation and Air Quality. “With this agreement, IMSA is committing to a wide variety of actions that will lead to reduced air pollution, less fuel use, and will move the racing community towards more sustainable practices.”

“SAE is thrilled to continue our partnership with IMSA,” said Mark Chung, SAE International’s Chief Marketing Officer. “We look forward to working with IMSA in increasing utilisation of Green Racing Protocols and how that will translate to their many partners to advance the technology of the broader mobility industry.” 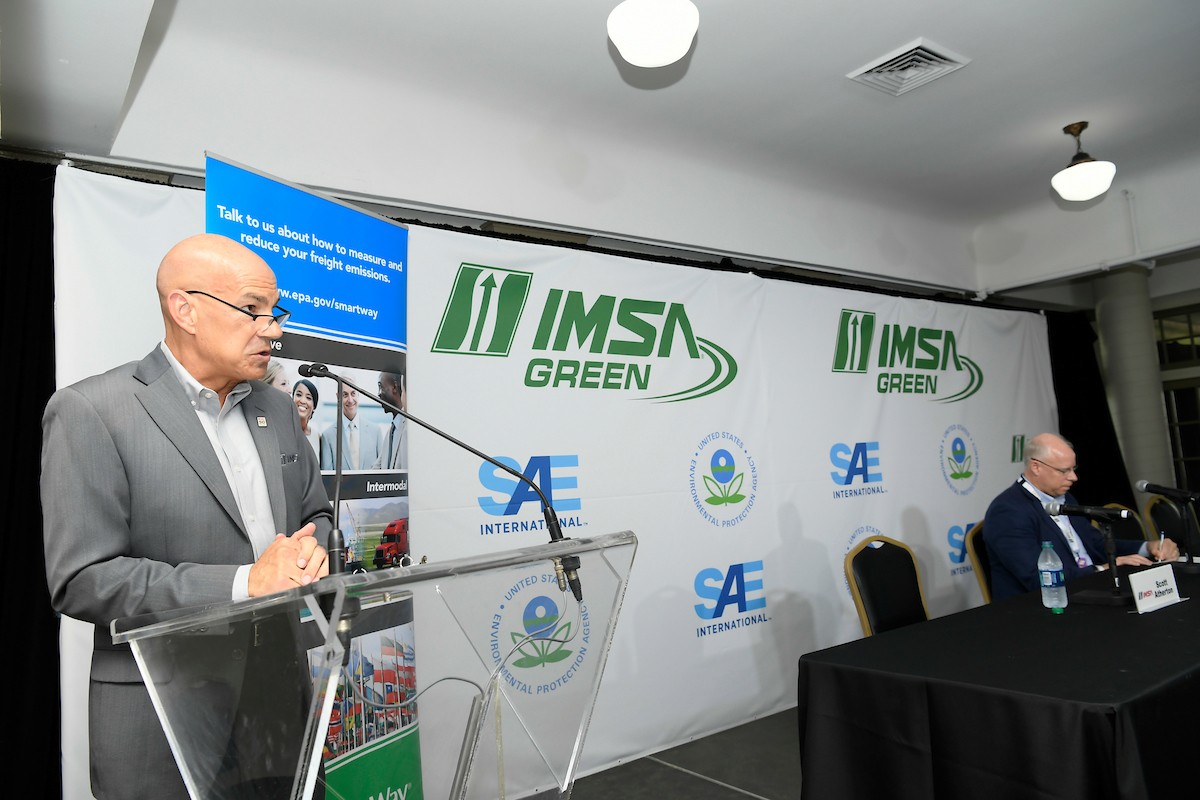 “Green Racing is a great platform to educate our stakeholders and fans about what IMSA’s environmental mission is all about and how it is directly tied to the priorities of nearly all of our 19 automotive partners.”